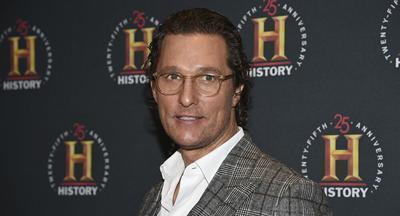 American film star Matthew McConaughey has just unveiled his first-ever book ‘Greenlights’. To promote the work, the Oscar-winning actor recently appeared on the podcast of Canadian professor and psychological guru Jordan Peterson, who is popular among conservatives but often snubbed by the left.

Matthew McConaughey has found some support among fans after witnessing a wave of criticism and accusations of “alt-right flirting” in recent days following his interview with public lecturer Jordan Peterson; the two talked about the actor’s new book, “cancel culture” and some of the pitfalls of fame.

As such, on Wednesday, The Daily Beast published an article titled “Matthew McConaughey Keeps Flirting With Alt-Right Darlings”, that discussed the actor’s online conversations with Peterson and earlier, comedian Joe Rogan. The hit piece  slammed McConaughey for his political inclinations and defence of some “cancelled” Hollywood figures, including comedian Louis C.K.

While the Daily Beast did not directly call to “cancel” the ‘Interstellar’ star, the piece advised the actor to “engage a little more deeply” with viewpoints he doesn’t necessarily share. However, many found the article hypocritical, as it seemed to reject the freedom of belief of anyone not on the political left.

“‘Flirting with alt-right darlings’ because he dares to think outside the bubble. This is such a disturbing warning to McConaughey to ‘get in line’ with elitist liberal think or else be publicly castigated and cancelled,” one person raged on Twitter, commenting on the Daily Beast’s piece.

Translation: McConaughey went on Peterson’s podcast and talked about self determination, humility, and CANCEL CULTURE in Hollywood https://t.co/to8P5BFqEe

Over the last several years, the Daily Beast has dedicated itself to shaming anyone who associates with anyone who might be even slightly center-right by labeling that center-right person as alt-right, fringe, etc. https://t.co/K6Ov96nENj

Many were simply outraged by the fact that Peterson, who always publicly spoke against right-wing nationalism, was indirectly dubbed an “alt-right” figure.

I dont even understand why Peterson is considered alt right, I dont know a hell of a lot about him as I came across this video because I like McConaughey and not the other way around, but I dont see how Peterson is Alt right?

Daily Beast publishes this hit piece suggesting Matthew McConaughey has been associating with the lat-right.

Their cited examples are @joerogan, @benshapiro, & Jordan Peterson. Whatever you think of them, they aren’t remotely alt-right. https://t.co/5B27xyXSwm

​The professor, who has just returned to public life following an extensive bout with health issues, has been an outstanding critic of identity politics and Canadian legislation which dictates that people must use gender-neutral pronouns in relation to non-binary people. However, Peterson has maintained that attempts to peg him as right-wing had always been a mistake.

During the podcast, Peterson revealed that he and McConaughey have been corresponding for about a year now, as the actor admitted that a lot of the professor’s thoughts had given him “confidence” to go on with his book.

“Many of the things you said I had been thinking about, but I heard you putting them into words and contexts, I was like, ‘Wow, that’s what I’m talking about, that’s what I’m trying to get to.’ And a lot of it goes back to self-determination, which we’ve talked a lot about. Self-authoring,” McConaughey told Peterson during their conversation.

“You see a lot of those threads through my book. Maybe in a different way, in a more folksy way. But a lot of what you’ve said gave me confidence to go, ‘I’m gonna put my story on paper.’ So I thank you for that. And that’s why I thank you in the back of the book,” the actor continued.

In a bid to write his ‘Greenlights’ manuscript that was published in October, McConaughey had spent five periods, 12 days each, in a solitude in the desert with nothing but food, water and his journals, which he had been writing since 14 years old.

The actor has been an occasional critic of the “illiberal left” culture which dominates Hollywood. Previously he came under fire in 2017 for his call on colleagues to admit that “very dynamic” Trump was “our president”.

“At the same time, it’s time for us to embrace, shake hands with this fact, and be constructive with him over the next four years,” he said at the time. Many considered his words divisive, but they resonated with others, who urged Trump’s haters to accept the reality.

His appearance at Peterson’s podcast has seen many applauds among viewers who defended the duo’s message advocating for variety of opinions and freedom to make mistakes.

I watched you conversation with Matthew McConaughey earlier this evening and agree that people do need a 2nd chance, we all mess up, none of us are perfect!

According to todays new world order, he’ll probably get cancelled for saying that