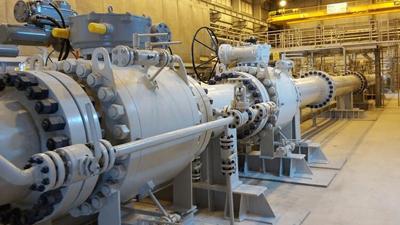 The Trans-Anatolian Natural Gas Pipeline (TANAP) has reached a plateau of its 16 billion cubic meters (bcm) annual capacity, the CEO of the company running the pipeline said on Jan. 14.

“We can increase the capacity gradually to 31 bcm per year with additional compressor investments. Some six years ago, we had planned to raise the capacity to 24 bcm steadily. But, for such an increase, there needs to be an adequate volume of natural gas and demand for it to be sold,” TANAP CEO Saltuk Düzyol told a group of journalists in a video conference.

Natural gas and oil prices fell significantly as demand plunged globally amid the coronavirus pandemic, he said. “There isn’t a good climate for upstream or downstream investments. We can think of extensions once demand recovers.”

Commercial gas flow through TANAP, the 1,850-kilometer pipeline, started on June 30, 2018. In its first operation year, more than 2 bcm of natural gas was carried to Turkey. With a gradual increase in capacity since then, the total of Azerbaijani gas delivered to Turkey’s national company Botaş reached 8.4 bcm as of Dec. 31, 2020.

Düzyol said that the annual volume of natural gas delivered to Turkey would stay stable at 6 bcm per year until a new increase in capacity.

The Trans Adriatic Pipeline (TAP), TANAP and the South Caucasus Pipeline are sections of the 3,500-kilometer Southern Gas Corridor (SGC) built to carry natural gas from the Shah Deniz field in the Caspian Sea to Italy through Azerbaijan, Georgia, Turkey, Greece and Albania.

Commercial natural gas supplies to TAP via TANAP started on Jan. 1. “For the first time in history, Azerbaijan’s natural gas reached the European market through a direct pipeline connection,” the State Oil Company of the Azerbaijan Republic (SOCAR) said in a statement.

The giant Shah Deniz field off the coast of energy-rich Azerbaijan was discovered in 1999 and was estimated by BP to hold about 1 trillion cubic meters of natural gas.

The SGC project is backed by the European Commission as part of efforts to curb Europe’s dependence on Russian energy.

Russia controls 34 percent of Europe’s gas market and plans to raise gas exports to Europe, including Turkey, from 171-172 bcm expected last year to 183 bcm this year. Europe’s annual consumption stands at around 500 bcm, which is used mostly in power generation.

The gas delivery agreement between TANAP and Botaş will expire in 13 years, but it can be extended for more than 30 years.

In the near future, the company has no plans for an initial public offering, Düzyol said.

“Shareholders can decide on that in the future,” he added.

TANAP was awarded “Project of the Year 2020” by the Philadelphia-based Project Management Institute (PMI) for its efficiency and respect for the environment and cultural heritage.

The overall cost of the project was 45 percent lower than initial calculations, Düzyol said, celebrating his project teams for their business acumen.