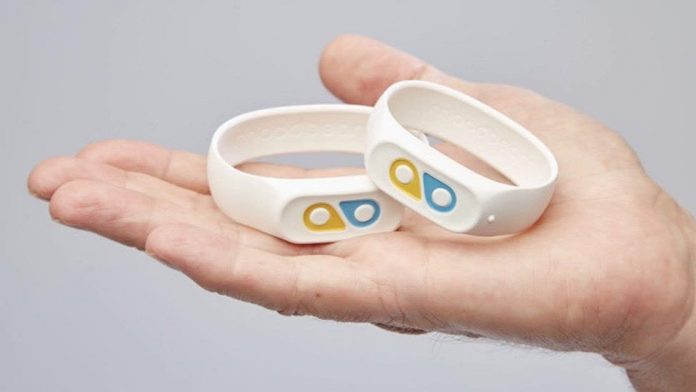 image caption The user of the wristband presses the yellow button if they are happy, and the blue if they are not

At first glance the silicone wristband could be mistaken for one that tracks your heart rate when you are doing exercise.

However, the wearable technology, called a Moodbeam, isn’t here to monitor your physical health. Instead it allows your employer to track your emotional state.

The gadget, which links to a mobile phone app and web interface, has two buttons, one yellow and one blue. The idea is that you press the yellow one if you are feeling happy, and the blue one if you are sad.

Aimed at companies who wish to monitor the wellbeing of staff who are working from home, the idea is that employees are encouraged to wear the wristband (they can say no), and press the relevant button as they see fit throughout the working week.

Managers can then view an online dashboard to see how workers are feeling and coping. With bosses no longer able to check in physically with their team, Moodbeam hopes to bridge the gap.

“Businesses are trying to get on top of staying connected with staff working from home. Here they can ask 500 members: ‘You ok?’ without picking up the phone,” says Moodbeam co-founder Christina Colmer McHugh.

She originally came up with the idea for the product after she discovered that her daughter was struggling at school, and she wanted a way for her child to let her know how she was feeling. The wristband was launched commercially in 2016.

With many children, especially teenagers, likely to balk at the idea of having to press a button on a wristband to let their parents know how they are doing, how probable is it that employees would be willing to do the same for their boss?

Ms Colmer McHugh, whose firm is based in Hull, says that many are indeed happy to do so. “We moved away from anonymous to identifiable data after trials found that people do want to be identified,” she says.

“One member of the team was in an uncomfortable place, struggling with a huge workload, and disillusioned with what was going on,” says trustee Paddy Burtt. “It’s not something he would have flagged up, and we wouldn’t have known about it unless we had seen the data.”

With depression and anxiety estimated to have cost the global economy $1 trillion (£730bn) per year in lost productivity before the pandemic, according to the World Health Organization, mental health in the workplace has long been a concern. However, Covid-19 lockdowns and home working appear to have worsened the issue.

UK mental health charity Mind said last year that 60% of adults thought their mental health had got worse during the first lockdown. And a survey by human resources software firm Employment Hero suggested that a quarter of people employed by small and medium-sized UK firms wanted more mental health support during the pandemic.

With most of us not due to return to the office any time soon, a number of other technology firms are also exploring ways to help companies better look after their employees’ emotional wellbeing.

In San Francisco, mental wellness app Modern Health aims to help employers more easily connect their workers with a variety of mental health resources, such as sessions with therapists.

The journey starts with staff answering a short online questionnaire about their mental health, leading to a personalised mental healthcare plan. This could involve video call sessions with an expert on dealing with anxiety, or being directed to a digital meditation plan.

“The idea is to give employees the tools to build resilience,” says Alyson Friedensohn, chief executive of Modern Health, which has 190 companies around the world signed up. “People are working from home and struggling. Leaders can no longer expect employees to compartmentalise what is going on at work and in their personal life.”

This blurring of our work life and downtime is one key aspect of working from home that many of us struggle with. To help better separate the two, Microsoft is set to implement a “virtual commute” across its Teams file-sharing and video-conferencing app.

Billed as a mental bookend for the workday, as the end of the day approaches, users will receive a notification. This will prompt them to go through a series of activities such as adding pending tasks to a to-do list for the next day, reflect on how they felt about the day, and a guided meditation session via the Headspace meditation and sleep app.

“Nobody enjoys commuting, but in our research we found that people appreciated the cognitive separation to mindfully transition between work and life,” says Kamal Janardhan, Microsoft’s general manager for workplace intelligence. “There is a need to empower people to create structure and wellbeing in long workdays.”

Mental health charity Mind says that as people continue to work from home “it is really important [that employers] commit to prioritising staff mental health”.

“Those who prioritise staff wellbeing are more likely to report more productive staff, who are less likely to need time off sick or leave… altogether,” says Emma Mamo, Mind’s head of workplace wellbeing.

However, some human resources experts warn that increased use of technology should not be used as a quick plaster to help staff working from home. Chris Rowley, professor emeritus of human resource management at Cass Business School, University of London, says it has to be backed up with proper support for employees.

“These are very worthy intentions around mood and mental health,” he says. “However… employers looking after staff working from home need to reduce staff feelings of isolation by building a sense of belonging and community.”

UK tech firm Yonderdesk aims to help firms do just this by enabling businesses to bring employees back together in the office – virtually.

Yonderdesk builds interactive, web-based digital offices for firms, with employees designated a specific virtual desk. The office can be designed to replicate exactly a company’s real one, or have a completely different design or layout.

Want a video call with a colleague? Simply click on their icon. Or if someone from outside the business is getting in touch, they “appear” in the virtual reception area.

Sheffield-based food company Delicious Alchemy has been trialling Yonderdesk’s tool in recent weeks. “It has been beneficial in creating a sense of being part of a team, despite not being able to be together in one place,” says Nigel Glendinning, Delicious Alchemy’s chief executive.