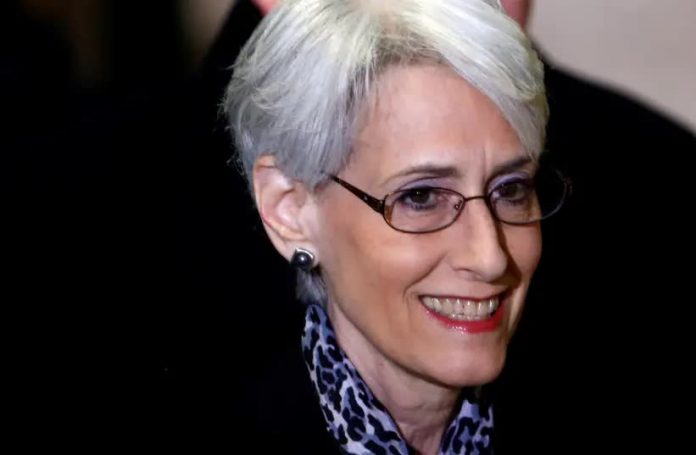 Sherman was the chief Iran deal negotiator and among the top former officials extolling its praises as the Trump administration exited the agreement.

Wendy Sherman arrives for a meeting on Syria at the United Nations European headquarters in Geneva February 13, 2014
(photo credit: REUTERS/DENIS BALIBOUSE)
The incoming Biden administration’s announcement that it has picked Wendy Sherman as deputy US secretary of state tilts the balance toward a return to the Iran nuclear deal, which Israel will likely object to more than any other appointment to date.
To be sure, Sherman is highly qualified, experienced and knowledgeable about the Islamic Republic.
She will also not be the top decision-maker.
Incoming US secretary of state Anthony Blinken and President-elect Joe Biden are above her, and both of their messages have been more friendly to at least some of Israel’s concerns about the US rejoining the deal, such as Tehran’s attempts to smuggle precision-guided missiles to Hezbollah and into Syria.
But Sherman was the chief Iran deal negotiator, among its chief explainers and among the top former officials extolling its praises as the Trump administration exited the agreement.
Incoming national security adviser Jake Sullivan, CIA director William Burns, and environmental czar John Kerry were all heavily involved in the 2015 nuclear deal as well.
Kerry, especially, was the public face of the deal – in some ways more than Sherman.
Israelis on a bipartisan basis had been concerned that even if Kerry’s portfolio is technically limited to the environment, his seat on the National Security Council would lead to him pushing for rejoining the deal with fewer attempts to fix what Israel and its moderate Sunni Arab allies view as loopholes.
Sullivan got some of the initial steps of the deal done in secret trips before anything became public, and he and Burns had written numerous articles, some of which strongly supported returning to the deal and criticized the Trump administration’s “maximum pressure” campaign on Iran.
But Biden’s own concerns about the precision-guided missiles threat and his openness to filling some of the loopholes that Israel is concerned about as expressed in a major interview with Thomas Friedman, along with similar messages from Blinken, had suggested that the administration may be undecided as to whether it would quickly rejoin the Iran deal or make some of the demands that Israel and moderate Sunnis have demanded to improve it.
SHERMAN’S APPOINTMENT seems to be a decisive sign that the US will not only move to rejoin the deal, but that the new administration’s approach will be that the original deal was mostly adequate.
A benefit of appointing veterans with diplomatic experience to top jobs is that they do not need to waste time learning the ropes. Undoubtedly, Sherman will show positive experience for the US in spheres beyond Iran.
But when you appoint someone who originally made the 2015 nuclear deal into a position where they are likely to be a key if not the key negotiator of the terms for returning to the deal, you automatically put that person in a position where any change made to it may be perceived as them having gotten it wrong the first time.
There simply is no incentive for Sherman to agree to changes.
Then again, some changes will happen no matter what.
There are facts that did not exist in 2015 that exist now, such as the Islamic Republic’s progress in advanced centrifuge development and that it now has two underground facilities, where before it had only one.
Presumably – or hopefully – at least these changes will be addressed.
Yet how can an administration with Sherman at its front explain to the Iranians why they need to accept changes while she was the one who told them the old deal was fine?
None of this means that US sanctions will be removed on January 21.
Iran’s own combativeness likely ensures some weeks or months of wrangling. Biden on a visceral level will not have as much optimism about what to expect from the Iranians the way it appeared that former US president Barack Obama did.
True, Obama’s slogan was “verify,” not “trust,” but he and others involved have admitted that they had hoped for some more signs of normalized behavior from Tehran, at least during the almost 18 months of the deal during his term.
Appointing Sherman to this key role ensures there is a new major force for rejoining the deal without too many changes who has a hand on the Biden administration’s wheel – and knowing that in advance, Biden himself specifically wanted her to be there.