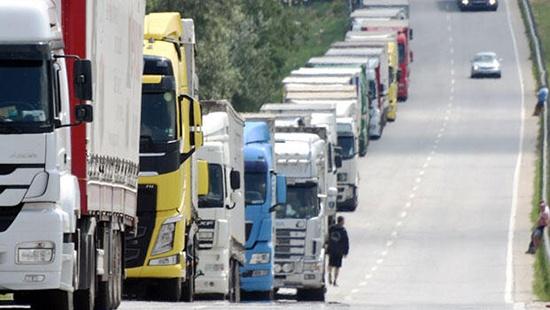 The lorries turned up at the entrance to Boris Johnson’s office, as shellfish exporters said they were protesting against the post-Brexit red tape standing in the way of their fishing business.

Over 20 shellfish lorries, including one with the slogan “Brexit carnage”, have parked on the road just metres from 10 Downing Street in central London, Reuters reported. Another one featured the words: “Incompetent government destroying [the] shellfish industry”.

@theSNP, @ScotTories please share and give support to Scottish Shellfish Exporters who are protesting in London today at the impact of Brexit on their businesses. If this is not on mainstream news today ask yourself why? #BrexitBritain #BrexitDisaster pic.twitter.com/3KfxMqfsBl

Police have asked the lorry drivers for details. The vehicles appeared downtown, a stone’s throw away from the British prime minister’s official office, after a series of issues had arisen regarding fish exports to the European Union in the wake of Brexit.

Several years ago the media jumped on hoey and farage doing their rotting fish prank on the Thames.

This morning our own Scottish fishing industry is doing laps of Whitehall in protest and I can’t see any kind of coverage anywhere.

What is going on? pic.twitter.com/3Po0amN7G9

In particular, quite a few Scottish fishermen have been unable to export their stocks to Europe after the EU withdrawal stipulated the introduction of catch certificates, health checks, and customs declarations, with the latter drastically delaying their delivery times and thus prompting European buyers to turn them down.

The shellfish exporters said they were protesting in London over post-Brexit bureaucracy, which had been hindering their businesses, they complained.

“We strongly feel the system could potentially collapse”, Reuters quoted Gary Hodgson, a director of Venture Seafoods, which exports live and processed crabs and lobsters to the EU and which has trucks parked near Downing Street.

“Prime Minister Boris Johnson needs to be honest with us, with himself, and with the British public about the problems for the industry”, Hodgson shared.

The ambassadors of the 27 European Union states unanimously approved the EU-UK Trade and Cooperation Agreement on 28 December, and it took effect at 2 p.m. UK time the next day, on 29 December.

Michel Barnier, who held talks on behalf of the French, Dutch, Danish, and other fishing fleets, got Johnson’s government to agree to a deal that allowed EU boats to fish in British waters until at least 2026. Under the accord, British fishermen are due to get an increase in their quotas over a five-year period and if, at the end of that period, London decides to expel all EU fishing boats then Brussels is permitted to respond with import taxes on British fish coming into the bloc.