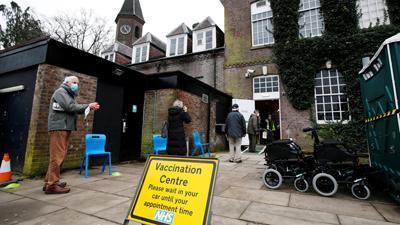 Some 140 people are getting a coronavirus jab in the UK per minute, Vaccine Deployment Minister Nadhim Zahawi has said, revealing that police officers, teachers and shopkeepers will be prioritised next.

Britain’s quest to vaccinate its population against coronavirus is going at a great pace, Zahawi told Sky News on Monday.

“It is going well, we’re vaccinating on average 140 people, that’s first jab, literally a minute. That’s the average, so some areas are doing better,” he stated. “You’ll see that improve as we open more of the large vaccination centres, 17 in total by this week and 50 by the end of the month.”

The UK is set to accelerate its vaccination process even further. Twenty-four hour vaccination sites, offering coronavirus jabs non-stop, will be piloted in London by the end of January, the minister said.

According to the latest figures, more than 3.8 million people have already received the first dose of the vaccine, while some 450,000 have already got the second one. The vaccination process currently prioritises the most endangered groups, including medical workers and the elderly, starting with those who are in care homes or over 80 years of age. Others who deal with large numbers of people will be given the priority next.

“Teachers, police officers, shop workers, those who through no fault of their own other than the work that they do may come into contact with the virus in much greater volume, should be top of the list,” Zahawi told Times Radio.

The vaccine manufacturing process is going slower than anticipated, however. While the UK has been hoping to receive 2 million doses per week from AstraZeneca, such numbers will not be reached until mid-February, Zahawi admitted.

“It’s been a bit lumpy,” the minister told the BBC. “There’s bound to be delays. Any new manufacturing process has challenges at the outset, it is lumpy, it begins to stabilise and get better and better week in, week out.”