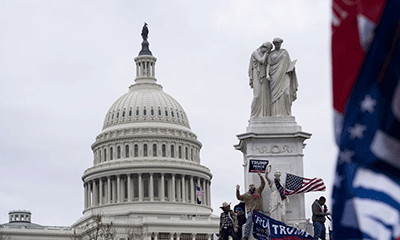 The US is falling apart – this is not an alarmist statement made by external observers with prejudice toward the US or ulterior motives to badmouth the country, but the opinion of a majority of the Americans.

According to an Axios-Ipsos survey conducted between January 11 and 13, around four in every five Americans, both Democrats and Republicans, believe that the US is falling apart.

The poll, which included interviews with more than 1,000 adults, was released a week after the Capitol riots on January 6. Many US netizens acknowledged the poll result on Twitter. Some said that the US system has failed people who actually need help, and this past year was just a display of the terrible governance by people in high positions. Some regard the US as “a third world failed state.”

More and more Americans believe the US is falling apart. Behind this is their declining confidence in the country. The country that they used to believe was omnipotent has in fact made them fall into distress, fear and horror. The US has failed to curb the COVID-19 epidemic. The rampaging virus has killed nearly 400,000 Americans and is killing more. President-elect Joe Biden will face the utmost difficulties in beating this challenge after he assumes office on January 20.

After the Capitol riots, the US has become a laughing stock in the international arena. The American beacon for Western liberal democracy is falling down. The heavily guarded Washington in the lead-up to Biden’s inauguration on January 20 has greatly upset many Americans. In a CBS News-YouGov poll released Wednesday, around two thirds of those polled said they believe it is either somewhat or very likely there will be more attempted violence in Washington, DC next week. US media and scholars have even compared the tense atmosphere before Biden takes office to that of the eve of the Civil War in 1861.

Biden is about to take power, but half of Americans disagree with him and the government he leads. Many worry there will be “two Americas.” The division in the US is unprecedented. Economic contraction, the decline in people’s living standards, rising unemployment rate, widening wealth gap, deepening racial conflicts and uncontrolled epidemic all indicate that the social contradictions and differences in the US will intensify.

But so far, the US has neither shown any governance and reform capability nor the determination to solve these problems. The national governance of the US has deviated from the normal track, and has been kidnapped by partisan struggle, leadership change and social divisions.

Is the US falling apart? Given the crises the US is undergoing, no wonder the answer of a majority of Americans is yes.

The US is plagued by many domestic problems. If it cannot make the greatest efforts to resolve deep-seated domestic conundrums, but instead tries to deflect public opinion by playing the diplomatic card, especially engaging in head-on confrontation with China in the long run, the possibility that the US will collapse will be increased, some Chinese scholars have warned.

Why has the US come to such a situation? Many Westerners attribute the current US crises to President Donald Trump and his administration. Such a view is too simplistic. Trump is not the cause but a symptom of an American world going down. Americans should look for the roots of their country’s problems.

In the past few decades, Americans have been playing up the “China collapse” theory. Now, China is believed to lead the global recovery from the pandemic while the US has been mired in crises that many are worrying may lead the country to collapse. Perhaps we should ask scholars who once hyped the “China threat” theory, such as Gordon Chang: Is the US the one falling apart? Is the US collapse theory a subject more worthy of scholars to study?