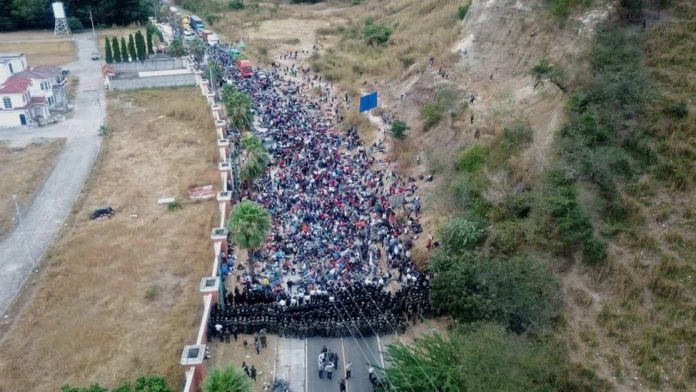 A caravan of US-bound Central American migrants has been met with truncheons and tear gas in Guatemala, where security forces blocked their path.

Thousands of people were intercepted on a road near the border with Honduras on Sunday. The government said it would not accept “illegal mass movements”.

An estimated 7,000 migrants, mostly from Honduras, have entered in recent days, fleeing poverty and violence.

They hope to travel on to Mexico, and then the US border.

Every year, tens of thousands of Central American migrants attempt this perilous journey to try and reach the US, often on foot.

President-elect Joe Biden, a Democrat, has vowed to end to the strict immigration policies of his predecessor, Donald Trump, a Republican.

But the Biden administration, which will take office on Wednesday, has warned migrants not to make the journey, as immigration policies will not change overnight.

What happened when the caravan entered Guatemala?

As the migrants trekked across Guatemala towards its border with Mexico, they were impeded by security forces near the south-eastern village of Vado Hondo.

A group of soldiers and police officers blockaded a road, stopping many of them from advancing. Some people still attempted to force their way through, prompting security forces to push them back.

Many migrants retreated, with some waiting nearby to make a new attempt later. Others fled into nearby mountains.

“Fortunately, our security forces managed to contain this pitched battle,” Guillermo Díaz, director general of the Guatemalan Migration Institute, told the New York Times. “We managed to calm everything in a very complicated situation.”

A statement from the Guatemalan president’s office said: “Guatemala’s message is loud and clear: These types of illegal mass movements will not be accepted, that’s why we are working together with the neighbouring nations to address this as a regional issue.”

Why are so many people coming now?

The migrants say persecution, violence and poverty are a daily reality in their home countries. Conditions have been made worse by the devastation wrought by two huge hurricanes that battered Central America last November.

So, in search of a better life, they want to reach the US in the hope of finding work and safety.

Dania Hinestrosa, a 23-year-old travelling with her daughter, told AFP news agency: “We have no work, nor food, so I decided to go to the United States.”

The promise of new immigration policies under Mr Biden’s administration is also thought to have spurred some migrants to make an attempt to reach the US border.

What is the incoming US administration saying?

Members of Mr Biden’s team have warned Central American migrants not to make dangerous journeys to the border.

Speaking to NBC News, an unnamed senior Biden administration official said migrants attempting to claim asylum in the US “need to understand they’re not going to be able to come into the United States immediately”.

The Biden administration will prioritise undocumented immigrants already living in the US, not those heading to the country now, the official said.

“Processing capacity at the border is not like a light that you can just switch on and off,” Susan Rice, one of Mr Biden’s policy advisers, told the Spanish language news agency Efe in December.

“Migrants and asylum seekers should absolutely not believe those in the region selling the idea that the border will suddenly be fully open to process everyone on day one. It will not.”

Mark Morgan, acting commissioner of US Customs and Border Protection, last week urged would-be migrants at the southern border not to “waste your time and money”.

The US commitment to the “rule of law and public health” is not affected by the change in administration, he said in a statement.

More than a dozen caravans, some with thousands of migrants, have set off from Central America in recent years. One of the largest came from Honduras in October 2018, provoking President Trump to brand it “an invasion”.

But all have run up against resistance under Mr Trump, who put pressure on Mexico, Guatemala, Honduras and El Salvador to crack down on illegal north-bound migration.