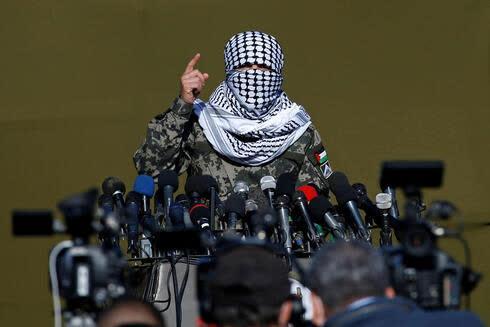 Opinion: Normalization with Israel will advance because it responds to Arab state interests; Palestinians have already seen they cannot stop it, and it presents both opportunity for region and revived role for U.S. as sole broker with true leverage.

A Palestinian militant gestures as he speaks to the media during the first-ever joint exercise by Gaza’s terror groups, Dec. 2020
(Photo: Reuters)

After Ariel Sharon announced his intention to withdraw from Gaza but months before Israel actually did so in 2005, I gave speech in Gaza City to the Palestinian Council on Foreign Relations.

Between 200-300 Palestinians were in attendance and I emphasized that Palestinians had a real moment of opportunity: take advantage of the Israeli withdrawal to promote economic development and good governance in Gaza; do so, and the international community (and the Israeli public) will say if it works in Gaza why not also the West Bank.

Alternatively, if Gaza is turned into a platform for attacks against Israel, or a hotbed of terror, who is going to argue for applying that failed model anywhere else.

In making this case, I did not expect to immediately transform the minds of the audience, but I wanted to introduce the stakes and the possibilities for Palestinians.

My audience did not want to engage on my theme, they preferred in almost every question and comment to say America could not be an honest broker.

Having been Bill Clinton’s peace envoy, I pointed out that I was not a part of the George W. Bush Administration and it had chosen not to be a broker at all; it wasn’t an honest or dishonest broker, it simply chose not to be engaged the way the Clinton Administration had been.

So I asked the audience, with the U.S. having not played the role of a broker for the last four years, are Palestinians better off? In an audience that was not shy, suddenly, no one raised their hand.

Small wonder, the Second Intifada might not be raging as it had earlier but it had not ended and nearly 4,000 Palestinians (and over 1,000 Israelis) had died. I went on and said, while the U.S. chose not to be a broker, the Bush Administration made no effort to prevent anyone else from playing this role.

No one, however, came forward — not the Europeans, not the Russians, and not others. They all understood that a broker needs to have the means to affect or influence both sides in a conflict and the fact that no one else stepped forward to fill the void spoke volumes.

Only the U.S. could apply real leverage — positive and negative — on both Israelis and Palestinians, they could not.

I concluded by saying the issue is not whether one is an honest broker; it is whether they are an effective broker.

An effective broker is one that understands that no deal is possible unless you address the needs, not the wants, of both sides. To fulfill such a role, the broker must truly understand what is essential for each side.

Of course, if the parties are not up to making hard choices — or in the case of the Israeli-Palestinian conflict taking on history and mythology — resolving the conflict won’t be possible.

Today, the gaps between the Israelis and Palestinians psychologically and on the core issues are too wide to bridge. One doesn’t make peace more likely by pushing proposals that are bound to fail — that only deepens the cynicism and disbelief.

Instead, now, what is necessary is restoring belief. And, here there is both an opportunity, and an opening for the U.S. to play the brokering role.

The Arab state normalization process with Israel is a new reality in the region. It will go forward because it responds to Arab state interests and the Palestinians have already seen they cannot stop it.

While a state like Oman may simply normalize, the Saudis are likely to move only in stages. As they do so, as one senior Gulf official told me, they will want Israel to make some positive moves toward the Palestinians.

As an example, let’s say the Saudis could agree to establish a trade office in Israel, they might ask Israel to ease Palestinian housing shortages and unemployment by permitting legal construction for Palestinians in Area C of the West Bank.

Of course, if the Palestinians are going to gain something, they, too, should reciprocate. In this case, the Palestinian Authority would stop the practice of giving three times the social welfare payments to the families of those who commit acts of violence against Israelis than is given to all other Palestinians.

In this way, a U.S. brokering role now could not only build momentum behind the normalization process but also use it to break the stalemate between Israelis and Palestinians.

This is not the moment for big initiatives but it is a time for brokering practical steps on the ground that can restore a sense of possibility.