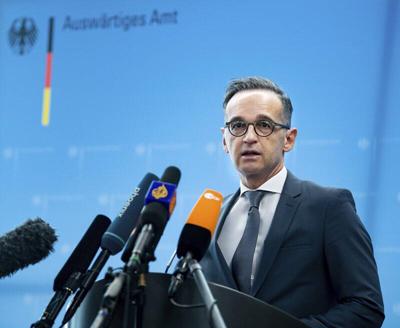 German Foreign Minister Heiko Maas will pay a one-day visit on Jan. 18 to hold talks on Turkey–EU relations days before Ankara and Brussels are set to engage in an intense dialogue to re-energize ties and discuss the renewal of a 2016 migrant deal.

Germany served as the EU term president in the second half of 2020 and exerted efforts to de-escalate tension in the eastern Mediterranean where Turkey and Greece have overlapping continental shelf claims. As a result of Germany’s influence, the European Council proposed a positive agenda in ties with Turkey in return for avoiding unilateral actions in the disputed waters of the eastern Mediterranean.

Following Çavuşoğlu’s Brussels visit, Michel and Leyen will travel to Turkey late January to hold talks with President Recep Tayyip Erdoğan in a Turkey-EU summit. The two main titles to be discussed between Ankara and Brussels are the renewal of the migrant deal and preparations for an international conference on the eastern Mediterranean.

Talks between Çavuşoğlu and Maas are expected to focus on these topics as Germany is very keen in holding the migrant deal with Turkey. Turkey says the deal must be renewed in light of new realities in the field as the number of refugees Turkey is hosting has doubled since 2016 and reached five million.

Libya on the agenda as well

The two foreign ministers will also review the regional developments, including Libya and Syria. Germany and Turkey had worked together for the Berlin Conference that took place a year ago for the cessation of hostilities and start of a political process for a solution.

Turkey’s support to the Government of National Accord (GNA) paved the way for balancing the situation in the field and nixing General Khaliha Haftar’s ambitions to capture Tripoli. That allowed a new understanding in the war-torn country and a new inter-Libyan peace process which proceeds in line with the expectations of the international community.

Çavuşoğlu is expected to raise Ankara’s concerns and complaints about EU’s Irini Operation that aims to monitor and implement a U.N. arms embargo in Libya. The two ministers will also discuss the latest in Syria as well as in the Nagorno-Karabakh.