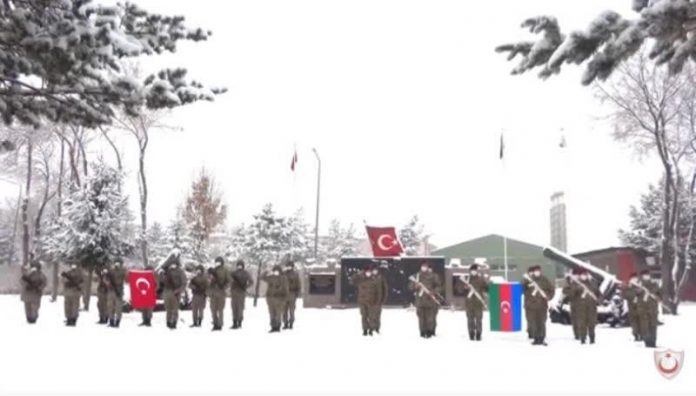 https://www.turan.az-Baku/17.01.20/Turan: The Turkish and Azerbaijani armed forces will hold joint military exercises in the eastern province of Kars from February 1 to 12, reported Turkish official sources.

The Azerbaijani military arrived in Kars through the Sadarak checkpoint. The Ministry of Defense of Azerbaijan informs about a group of military and equipment of the Separate Combined Arms Army of Nakhchivan that has left for Turkey.

The purpose of the exercise is to ensure the coordination of actions during joint operations, as well as to test new weapons and vehicles. Other tasks of the exercise include testing the combat capabilities of troops, including shooting in deep snow and severe frost, improving the level of training in winter conditions, arranging in the field, deploying, supplying and maintaining, as well as ensuring the operation of command systems.

The exercise in eastern Turkey will be one of the largest in recent years, Anadolu agency reported.

The last time in Kars, the joint exercises of the Armed Forces of the two countries were held from May 29 to May 31, 2018. Then Azerbaijan sent a mechanized infantry company to the exercises.

After the hostilities provoked by Armenia on the Azerbaijani-Armenian border in July 2020, Azerbaijani-Turkish exercises were launched in Azerbaijan using combat aircraft, artillery and ground forces.

Armenian media also report on the joint exercises in Kars.