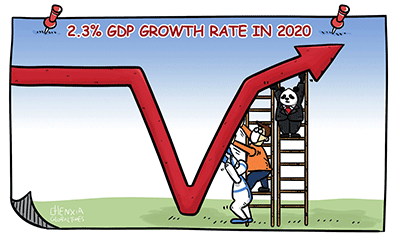 This is the lowest annual growth since China’s reform and opening-up, and is also a remarkable achievement in the year when the COVID-19 pandemic was raging. Germany’s GDP in 2020 shrank 5 percent. As for the estimates for other major economies, the GDP of the US, the UK and France is forecast to contract by 3.6, 10.3 and 9.4 percent, respectively.

It is worth noting that China attained the economic achievement while protecting its people’s health. The US has, to a great extent, given up its COVID-19 fight and lost hundreds of thousands of lives, and eventually met a 3.6 percent decrease.

China’s GDP in 2020 embodies humanitarian principles. It speaks louder than words. It is the result of Chinese people’s concerted efforts to overcome various challenges led by the Communist Party of China and the Chinese government. We believe it will make extreme anti-China forces in the US and its major allies very frustrated.

However, for the Chinese people, it is more important to win an overall victory in the COVID-19 fight and economic and social development in 2021. We have no time to neglect our current urgent work to be complacent.

Although the 2.3 percent annual growth is a great achievement compared to the world, it is still a 3.7 percentage decrease compared with last year. A considerable part of it has been borne by the private sector, reflecting the setbacks suffered by many individuals and families under the impact of the epidemic. In the past year, many people’s wages did not increase and some people’s income fell. Many small businesses in the service industry closed and the number of unemployed increased.

The pandemic has caused real losses and pain to Chinese society. The 2.3 percent growth reflects both the achievements in the fight against the pandemic and the costs mentioned above. We need to minimize these losses in 2021 and strive for some kind of compensation for those whose interests have been impaired. This should be an important goal of China’s economic work this year. We cannot be satisfied with our relative achievements compared with other major economies.

China is destined to continue its march in the fight against the epidemic in 2021. We have advanced and convenient detection methods and the vaccines have been administered to a large number of people. We have accumulated the experience of last year’s fight against the epidemic, and we believe this year’s fight will be more precise and effective, and the economy and people’s daily life will return to normal.

The anti-epidemic fight in the US and others is too poor and their economies are in a mess. In terms of how to fight the epidemic and restore development, we cannot use countries such as the US as reference. We can only compare ourselves with the needs and aspirations of the Chinese people.

We must resolutely bring the epidemic under control and ensure that it does not break out of control or spread everywhere. At the same time, we must resolutely avoid a large-scale or prolonged “economic shutdown.”

Even in areas where the epidemic is critical, we must continue to take comprehensive measures and explore the best way to balance the fight against the epidemic with the interests of the people. Local governments still have much to do.

We have seen that this winter’s epidemic situation is still quite intense, but the atmosphere is different from that of last year. Both the epidemic prevention and the work and lives of ordinary people are more calm and orderly. Different from countries such as the US and the UK where this winter has been much tougher than the last, the difficulties of this winter will not change the general trend of China’s fight against the epidemic.

China’s institutional advantages will continue to be unleashed and transformed into more benefits for the people. China in 2021 will do more to strengthen itself.