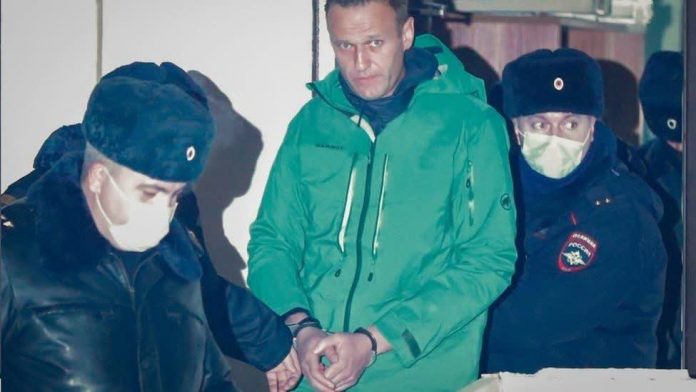 Russia’s leading opposition figure has been arrested and detained for 30 days, after returning to Moscow for the first time since he was poisoned last year.

Alexei Navalny said a court ruling held inside a police station was a mockery and called for street protests.

Dozens of his supporters gathered outside the Moscow police station where he was being held and shouted “disgrace” and “Putin resign”.

Mr Navalny was held soon after his flight from Germany arrived on Sunday.

Russian prosecutors say he violated the parole terms of a suspended sentence for embezzlement. He says the charges are politically motivated.

The Kremlin denies involvement. The opposition politician’s allegations have, however, been backed up by reports from investigative journalists.

On Sunday, big crowds gathered at Moscow’s Vnukovo airport to greet Mr Navalny’s flight from Berlin – but in a last-minute decision the authorities re-routed the plane to another airport in the capital.

A makeshift courtroom was organised on Monday at a police station in Khimki, on the outskirts of Moscow, where Mr Navalny had spent the night.

The judge ordered Mr Navalny’s detention until 15 February for violating his parole. He will have another hearing on 29 January to determine whether his suspended sentence of three-and-a-half years should be replaced with a jail term.

Mr Navalny said his treatment was beyond a “mockery of justice” and described the hearing as “lawlessness of the highest grade”.

“Don’t be afraid. Take to the streets, not for me, but for yourselves, for your future,” he said in a video address (in Russian) from the police station.

A crowd of about 200 Navalny supporters gathered outside the police station in freezing weather, demanding his immediate release.

Mr Navalny was later seen led away by police to one of Moscow’s prisons.

His lawyer, Vadim Kobzev, said they would appeal against the “illegal” court decision, according to Russia’s Interfax news agency.

Meanwhile, more than 70 Navalny supporters and journalists were detained across Russia on Monday, according to the Monitoring group OVD-Info.

The US and European Union led calls for Mr Navalny to be freed, but stopped short of threatening any punitive action.

US Secretary of State Mike Pompeo said Russian authorities were trying to silence their critics, while incoming national security adviser Jake Sullivan said the Kremlin’s “attacks on Mr Navalny are not just a violation of human rights, but an affront to the Russian people who want their voices heard”.

France, Italy, Germany and the president of the European Commission were also among those calling for his release.

“Rather than persecuting Mr Navalny, Russia should explain how a chemical weapon came to be used on Russian soil,” he said.

How did events unfold on Sunday?

As Mr Navalny gradually recovered after emergency medical treatment in Germany, he said he intended to return to Russia.

On Sunday, he made good on that pledge, boarding a flight despite warnings he would face arrest on landing.

The plane was packed with journalists, including from the BBC. Shortly before landing, the pilot announced that for “technical reasons”, the plane was being diverted from Vnukovo airport, where thousands of Navalny supporters had gathered, to Sheremetyevo airport, causing a stir among the passengers.

A number of people were detained by riot police.

‘He told us he was not afraid’

There had always been a feeling Flight DP936 from Berlin to Moscow with Alexei Navalny on board would not go according to plan.

So when the captain announced that the plane would be diverted to a different airport, Mr Navalny shouted his apology to everyone on board, many of whom were journalists.

After a ride in a bus from the plane to the airport, he told us he was not afraid and was very happy to return home.

As he approached passport control with his wife Yulia, he said to the border control officer with a smile: “You must have been waiting for me for a long time!” And it was probably true.

A few moments later, he was asked by policemen to accompany them or they would have to use “force”. Mr Navalny wanted his lawyer Olga Mikhailova – who was on the same flight – to go with him. But at that point, she had already crossed the border and was not allowed back airside as Mr Navalny was led away.

Russia’s prison service said the opposition leader “had been wanted since 29 December 2020 for repeated violations of the probation period” related to his suspended sentence for embezzlement.

Separately, Russian prosecutors have launched a new criminal case against Mr Navalny on fraud charges related to transfers of money to various charities, including his Anti-Corruption Foundation.

What happened to Navalny last August?

Mr Navalny collapsed on a plane flying from Tomsk in Siberia to Moscow. The flight was diverted to the city of Omsk, where he was admitted to hospital. He was airlifted to Germany in an induced coma.

European experts later said he had been poisoned with the extremely toxic chemical weapon Novichok, developed by Soviet scientists in the Cold War.

Last month, investigative reporters named three agents of Russia’s FSB security service who had travelled to Tomsk at the time Mr Navalny was there, and said the specialist unit had tailed him for years.

Mr Navalny later said he had duped an FSB agent into revealing details of the operation against him in a phone conversation, which he recorded and posted online. The FSB said the recording was “fake”.

President Putin has dismissed investigations by the Bellingcat website and other groups that have blamed Russian intelligence agents for the attack as “a trick”. He has alleged his rival is backed by US intelligence services.