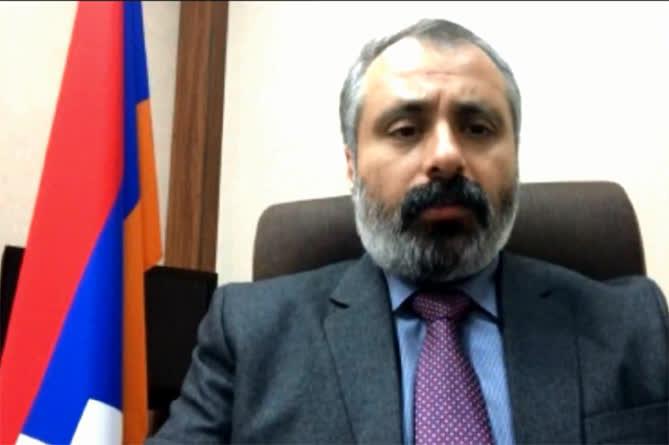 YEREVAN, January 19. /ARKA/.On January 19, Minister of Foreign Affairs of the Republic of Artsakh David Babayan sent letters to specialized bodies within United Nations and Council of Europe as well as to the Co-Chairs of the OSCE Minsk Group and Personal Representative of the Chairperson in Office in connection with the situation with the Armenian prisoners of war and civilians illegally held in detention by Azerbaijan, Artsakh Foreign Ministry said.

It said the letters in particular state, that in violation of the trilateral statement on complete ceasefire and cessation of all hostilities, signed by the leaders of Armenia, the Russian Federation and Azerbaijan on November 9, 2020 in December of the same year Azerbaijan launched an attack and occupied the villages of Khtsaberd and Hin Tagher in the Hadrut Region of the Republic of Artsakh. As a result of these offensive actions, 64 servicemen of the Defence army of the Republic of Artsakh were captured by the Azerbaijani forces. Later, the Azerbaijani authorities have announced their intention to prosecute them, which is a violation of international humanitarian law.

It is emphasized that Azerbaijan also delays the repatriation of the rest of the prisoners of war and civilians who fell into Azerbaijan’s hands during and after the armed aggression launched against the Republic of Artsakh on 27 September, 2020.

The letters underscore that this position of Azerbaijan contradicts its own commitments to fully implement the trilateral Statement, both in letter and in spirit, which would help heal the wounds of the bloody conflict.

The Minister of Foreign Affairs of the Republic of Artsakh invites to undertake urgent measures to ensure Azerbaijan’s implementation of the Geneva Conventions and to require official Baku to fulfill its obligations to guarantee all of the rights afforded to both prisoners of war and civilians, being kept in detention by Azerbaijan.

In an earlier statement, Armenia’s Foreign Ministry condemned the initiation of prosecution of the Armenian prisoners of war by Azerbaijan, as stated by the Foreign Minister of Azerbaijan, saying their release and repatriation is clearly enshrined in the November 9 statement.

It said the Armenian servicemen were captured as a result of the violation of another provision of the trilateral statement: Azerbaijan launched military operations in the direction of the villages of Khtsaberd and Hin Tagher in the Hadrut region of the Republic of Artsakh a month after the establishment of the ceasefire.

Notably the Azerbaijani side announced the prosecution of POWs about a month after the capturing of Armenian servicemen, which demonstrates that Azerbaijan is using Armenian prisoners of war as hostages to advance its political agenda.

On December 14, some 44 Armenian prisoners of war and other captivates were brought home by a Russian military plane from Azerbaijan and 12 Azerbaijani citizens were flown to Baku.
Armenia and Azerbaijan earlier agreed to “all for all” swap of POWs.

On December 28 another four Armenian prisoners of war were repatriated with the mediation of Russia and the International Committee of the Red Cross.

The exact data on the number of Armenians captives or soldiers gone missing during the war in Artsakh is not known. According to Armenia human rights organizations, Azerbaijan holds as many as 120 Armenian captives.