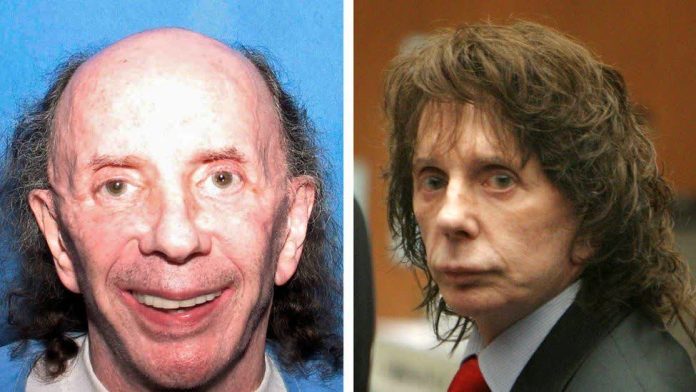 image caption In 2009, Spector was convicted of the 2003 murder of Hollywood actress Lana Clarkson

The BBC has apologised for the original headline in its reporting of the death of the convicted murderer Phil Spector.

The former music producer died on Saturday at the age of 81, while serving a prison sentence for the murder of Lana Clarkson in 2003.

The BBC said the headline “did not meet our editorial standards”.

The text was quickly changed to: “Pop producer jailed for murder dies at 81.”

“This was changed within minutes and we also deleted a tweet that had gone out automatically with the original headline,” a statement issued by the BBC read.

“We apologise for this error.”

“Our coverage of the story across BBC News has been clear that Phil Spector was convicted of the murder of Lana Clarkson and had a long history of violence and abuse,” it continued.

Spector was convicted of murdering Clarkson, an actress, in 2009.

His death was confirmed by the California Department of Corrections and Rehabilitation.

Reacting to the original version of the BBC’s story, pop star Lily Allen tweeted: “Rolling eyes at all the journos deliberately downplaying Phil Spector being a murderer in their headlines, so everyone points this out while linking to their articles resulting in lots of clicks.”

The headline was also discussed on TV and radio programmes on Monday, including Loose Women and Radio 4’s Woman’s Hour, and prompted an article in the Guardian.

The phrasing of the BBC’s article – and others like it – were “a reflection of how a man’s ‘genius’ is often viewed as more important than a woman’s humanity,” said columnist Arwa Mahdawi.

Spector, who transformed pop with his “wall of sound” recordings, worked with The Beatles, The Righteous Brothers and Tina Turner.

But after the commercial failure of Tina Turner’s River Deep, Mountain High, he largely withdrew from public life, and entered a long decline, marked by erratic behaviour, heavy drinking, and a fondness for guns.

“Unfortunately Phil was not able to live and function outside of the recording studio,” she wrote after his death was announced. “Darkness set in, many lives were damaged.”

Singer Darlene Love, who sang on several songs Spector produced, said he “changed the sound of rock ‘n’ roll” but likened their relationship to “a bad marriage”.

“The problem I have with Phil is that he wanted to control Darlene Love’s talent,” she told Variety. “If he couldn’t do that, he was going to do everything in his power to keep my talent from shining.”

“I would say I’m probably relatively insane, to an extent,” he told the paper, adding that he had “devils inside that fight me”.