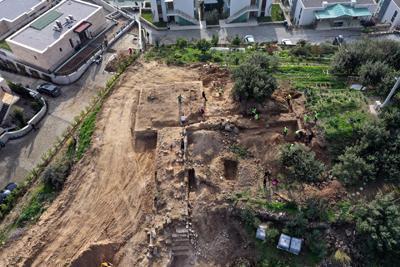 The rescue excavation and cleaning works that were initiated to unearth the approximately 7.5-kilometer-long historical “Halicarnassus Walls” in the western province of Muğla’s Bodrum district have been ongoing without interruption.

The Halicarnassus Western Walls Salvage Excavation and Cleaning Works Project, which is under the supervision of the Bodrum Underwater and Archeology Museum, is being carried out by the cooperation of the Bodrum Municipality and the Mediterranean Countries Academy (ACADEMIA) Foundation. Many workers and archaeologists are a part of this project.

Speaking to the state-run Anadolu Agency, Professor Adnan Diler, the head of Muğla Sıtkı Koçman University’s Archaeology Department and consultant of the project, said that the walls were built as part of a very special defense, and most of it has been under protection so far.

Diler stated that since Halicarnassus was under the modern settlement, most of its remains got damaged, but some of the walls are still standing.

Stating that when the Bodrum bus station and industry will move, the ruins, the stadium and other temples under it will come to light, Diler said, “Halicarnassus, the big capital of that time, will meet today’s modern Halicarnassus residents.”

Stating that the work will create an awareness of cultural heritage, Diler said: “The cultural identity of not only Halicarnassus but also the whole Bodrum Peninsula will be understood then. It will be a driving force in future studies.”

“The works will be done step by step. Later, works will continue in the form of landscaping and conservation studies. These studies will also contribute to high-quality cultural tourism. The Culture Ministry gives great importance and support to this work,” Diler added.

ACADEMIA Foundation President Özay Kartal said that they have been working continuously to protect the historical, cultural and archaeological values of Bodrum.

Emphasizing that they are very happy to start the project, which is very important for Bodrum, Kartal said: “We briefly say, ‘Bodrum’s historical past is the future of Bodrum tourism.’ In that respect, we want to claim all the remaining values from the ancient Halicarnassus.”

Kartal also noted that they have encountered many surprises from time to time during the ongoing excavations.

“The ancient Halicarnassus with its walls, gates and towers, say ‘I am here, I still exist.’ We are extremely happy to reveal the true identity of the city,” Kartal said.

“The city walls start from the Bodrum Port and continue towards Kaplan Tower and Bardakçı region inside the Military Camp. From here, it continues for 1.5 kilometers to Myndos Gate and then to Gümbet Junction, which leads to the Göktepe location with a one-kilometer climb. Firstly, we will conduct our works here. After the works here are done, we will move on to the eastern city walls,” Kartal added.