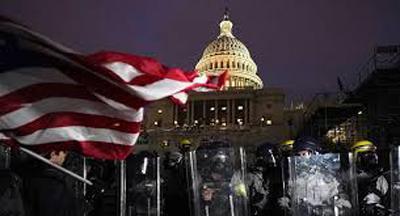 MOSCOW (Sputnik) – Federal authorities in the US have arrested Riley June Williams, a Capitol rioter who allegedly stole a laptop from House Speaker Nancy Pelosi’s office, The Washington Post reported on Tuesday, citing the Federal Bureau of Investigation (FBI).

According to the media outlet, Williams’ former partner told the FBI that she had stolen the laptop or hard drive during the 6 January riot at the Capitol building. The authorities are currently investigating the claims.

The woman’s friends reportedly have a video, in which Williams can be seen stealing the electronic device from Pelosi’s office, the newspaper added.

The ex-partner also told the FBI that Williams “intended to send the computer device to a friend in Russia, who then planned to sell the device to SVR, Russia’s foreign intelligence service”, as stated in a criminal complaint, obtained by The Washington Post.

Williams was previously charged with trespassing and disorderly conduct in the Capitol.

On 6 January, supporters of outgoing President Donald Trump stormed Capitol Hill in a bid to prevent Congress from certifying Joe Biden’s election victory. At least five people, including a female Air Force veteran, were killed and over 170 cases have been opened by police in connection with the riots.

The Democratic-controlled US House of Representatives approved an impeachment bill against Trump last week for inciting the riot. On Saturday, the US Department of Defence said that it would provide 25,000 troops, an unprecedented number, to ensure security during the Joe Biden inauguration on 20 January.