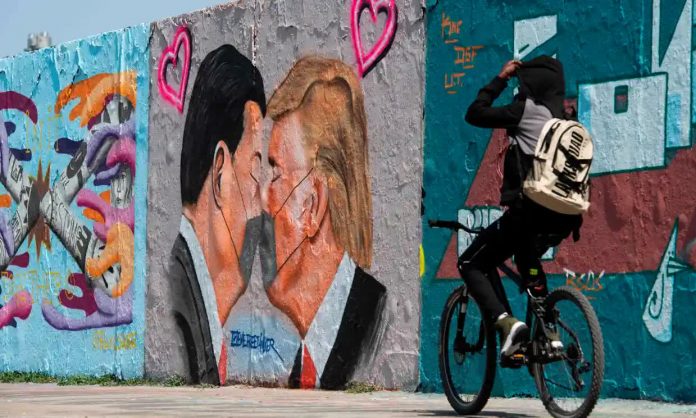 A majority of Europeans believe America’s political system is broken, that China will be the world’s leading power within a decade, and that Joe Biden will be unable to halt his country’s decline on the world stage, according to a report.

While many welcomed Biden’s victory in November’s US election, more Europeans than not feel that after four years of Donald Trump the US cannot be trusted, according to the study by the European Council on Foreign Relations.

“Europeans like Biden, but they don’t think America will come back as a global leader,” said the thinktank’s director, Mark Leonard. “When George W Bush was president, they were divided about how America should use its power. With Biden entering the White House, they are divided about whether America has power at all.”

The survey of 15,000 people in 11 European countries, conducted at the end of last year, found that the shift in European sentiment towards the US in the wake of the Trump presidency had led to a corresponding unwillingness to support Washington in potential international disputes.

At least half of respondents in all 11 countries surveyed felt, for example, that their government should remain neutral in any conflict between the US and China, while no more than 40% in any country said they would back Washington against Russia.

“It’s clear that the tumultuous Trump presidency has left an indelible imprint on Europe’s attitude towards the US,” said Ivan Krastev, chair of the Centre for Liberal Strategies, an NGO in Sofia, and an ECFR board member. “The majority of Europeans are now sceptical about the capacity of the US to shape the world. It makes many, rightly or wrongly, want to opt for a more independent role for the EU in the world.”

In their report, Leonard and Krastev note that while more than 60% of those polled believed the US was “broken”, most evaluated the EU and their own countries’ systems much more positively – an opportunity, they argue, to harness the collective power of the bloc for the benefit and protection of its citizens.

The survey found that 51% of those polled did not agree with the statement that under Biden the US was likely to resolve its internal divisions and seek to address international issues such as climate change, peace in the Middle East, relations with China or European security.

Amid a widespread sense of growing Chinese superiority, 79% of those polled in Spain, 72% in Portugal, 72% in Italy and 63% in France said they thought China would overtake the US as the world’s leading superpower within the next decade.

Just over 32% of all respondents – and a startling 53% of respondents in Germany – felt that after voting for Trump, Americans could not be trusted. Only in Hungary and Poland did significantly more people disagree with that view than agree.

Just 10% of those polled saw the US as a “reliable” security partner that would always protect Europe, while at least 60% in every country polled said they doubted their country could depend on US support in the event of a crisis.

The authors say the geopolitical consequences of this shift are significant: two-thirds of those surveyed said it was now important that Europe look after its own defence, including 72% in Portugal, 71% in Sweden, 70% in France and 69% in Poland.

At least half of respondents in every country surveyed said they would prefer their government to be neutral in a conflict between the US and China. Across the 11 states surveyed, only 23% of respondents thought their country should take Washington’s side against Russia, with 59% preferring to remain neutral.

Between 38% and 48% of respondents in seven countries thought the EU should adopt a tougher international stance on issues such as trade, taxation and regulation, while most countries considered Germany was now a more important country to “have a good relationship” with than the US.

The poll also revealed that in nine of the 11 countries – Denmark, France, Germany, Hungary, Italy, the Netherlands, Poland, Spain and Sweden – where the same question was asked in previous years, the average share of people saying the EU’s political system worked very or fairly well had risen from 46% to 48%.

It found that people who believed their own national political system was working, which was more often the case in northern than in southern Europe, were more likely to say the EU was a success.

The report identified four “tribes” that went a long way to grouping respondents’ positions, depending on whether they felt the EU, US or China were rising or declining. The biggest tribe, “In Europe we trust”, comprised 35% of respondents, while only 9% belonged to “In America we trust”.