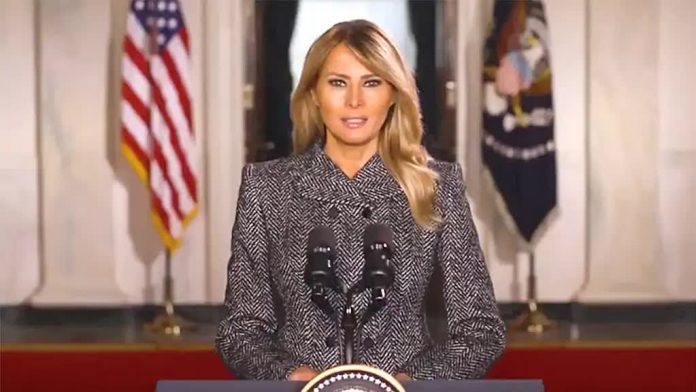 ‘Be passionate in everything you do, but always remember that violence is never the answer’

Outgoing first lady Melania Trump reflected on her four years in the White House during a farewell address to the American people on Monday.

In a nearly seven-minute-long video message, Trump thanked military service members, law enforcement workers, caregivers and others who have inspired her since she entered the White House in 2017. She highlighted her work, including her leading role in the “Be Best” campaign, which sought to address cyberbullying, opioid abuse and other challenges facing America’s children.

“It has been the greatest honor of my life to serve as first lady of the United States,” Trump said in the video message. “I have been inspired by incredible Americans across our country who lift up our communities through their kindness and courage, goodness and grace.”

The first lady spoke at length about the coronavirus pandemic, thanking health care workers for their efforts to combat the deadly virus. She called on Americans to “use caution and common sense to protect the vulnerable as millions of vaccines are now being delivered.”

Trump also appeared to reference the recent violence in Washington D.C., where mobs of pro-Trump rioters stormed the Capitol on Jan. 6 in response to President-elect Joe Biden’s victory in the presidential election.

“Be passionate in everything you do, but always remember that violence is never the answer and will never be justified,” Trump said.

In a break with longstanding tradition, the Trumps will not be in attendance for Biden’s inauguration on Wednesday. The outgoing president and first lady typically attend the event to symbolize the peaceful transfer of power.

Moving trucks were spotted outside the Mar-a-Lago resort in Palm Beach, Fla., where the Trump family is expected to reside upon leaving office.