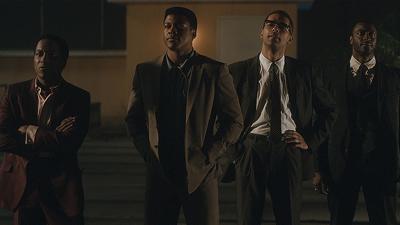 Michael McCaffrey is a writer and cultural critic who lives in Los Angeles. His work can be read at RT, Counterpunch and at his website mpmacting.com/blog. He is also the host of the popular cinema podcast Looking California and Feeling Minnesota. Follow him on Twitter @MPMActingCo

After the BLM protests of last summer, Amazon’s new movie has been eagerly anticipated. But it unintentionally diminishes the manufactured racial moral panic of today by highlighting the giants of the civil rights struggle.

The new Amazon film, ‘One Night in Miami’, is generating critical adoration for its powerful performances and for its supposedly timely social commentary on race and racism in America.

The movie, written by Kemp Powers and directed by Regina King, tells the story of a fictionalized meeting between Malcolm X, Cassius Clay, Sam Cooke and Jim Brown in a Miami hotel room in 1964, immediately following Clay’s victory over Sonny Liston to become the heavyweight champion of the world.

The movie is adapted from the play of the same name and features a series of long conversations and monologues about “the struggle” for civil rights and how “black people are dying in the streets” and “you must choose a side.”

Unsurprisingly, critics are calling it “timely” and saying it“shines a light on present-day America” because of the Black Lives Matter (BLM) protests last summer.

These are culturally cheap, socially easy and intellectually shallow lessons to glean from ‘One Night in Miami’. The movie strikes me not as an opportunity to highlight how much racism allegedly still exists in America today, but instead as a testament to the staggering amount of progress made in the last 57 years.

The civil rights movement of the 20th century dramatized in ‘One Night in Miami’ was one of the most extraordinarily successful endeavors in American history.

From 1964 to 2008, black people went from being second-class citizens protesting for voting rights to successfully voting for a black man for president. That black man, Barack Obama, won both of his presidential elections resoundingly.

The Civil Rights Act became law in 1964, and although it certainly didn’t happen overnight, over the course of the last 57 years, anti-black discrimination has receded in America to the point where it is now deemed legally, morally and socially repugnant.

Case in point is an early scene in the movie where Jim Brown visits a family friend, an older white man played by Beau Bridges, in his hometown in Georgia in 1964. After some lemonade and congratulatory conversation on the front porch, Brown offers to help the man move a piece of furniture inside the house. The man declines, telling Brown without a hint of shame that they “don’t let n*****s” into their home.

That scene is so shocking and jarring because it is inconceivable in modern day America.

Cassius Clay, who shortly after the events dramatized in the movie becomes Muhammad Ali, is a perfect example of the massive change in American perspective from 1964 onward.

In 1964, Clay/Ali was reviled by most Americans for being a loudmouth, malcontent and Muslim. By 1974, he was celebrated as an iconic hero for his courageous victory over George Foreman in the Rumble in the Jungle. By 1996, he was a living legend and avatar for the very best of America as he carried the torch for the US at the summer Olympics in Atlanta.

Objectively, by nearly every measure, discrimination in the US has been so reduced as to be nearly non-existent. Subjectively though, the ghosts of oppression still haunt black minds and guilt still infects white minds. This transforms the fight against racism from an external struggle against discrimination to an internal one against perceived prejudice (which still exists among all races) and that is a much more complex, complicated and confounding battle to wage.

The chains of slavery are long gone, as are the legal discriminations of the Jim Crow era – and yet, the need to project the subjective issue of prejudice into a struggle against the phantom of an external “systemic racism” and “white supremacy” in order to identify as both a noble victim and brave resistor is extremely powerful and intoxicating.

There is a certain sense of cos-playing in the current “anti-racist” movement. It is an existential yearning for purpose and meaning by trying to emulate the greats of the civil rights movement who succeeded in changing the country.

Every woke poseur, be they white or black, thinks they’re John Brown, Malcolm X and Huey P. Newton all rolled into one. They aren’t, they’re puffed up toddlers ranting and railing against the imaginary monsters hiding under their bed.

This immoral madness puts us on a downward trajectory that only leads to calamity in the form of a catastrophic conflagration.

As for ‘One Night in Miami’, I recommend it as it is a flawed but captivating film that boasts two Oscar-level performances from Kingsley Ben-Adir as Malcolm X and Leslie Odom Jr. as Sam Cooke.

Near the end of the movie, there’s a scene where Cooke sings his civil rights anthem, ‘A Change is Gonna Come’ on the Tonight Show.

The song’s soulful chorus is, “it’s been a long, long time coming, but I know, a change gonna come.”

Thanks to men like Malcolm X, Muhammad Ali, Jim Brown and Sam Cooke and countless courageous others, change has come, and ‘One Night in Miami’ is an excellent opportunity to acknowledge it.

Whether China hating or not, Western media’s influence dwindles here