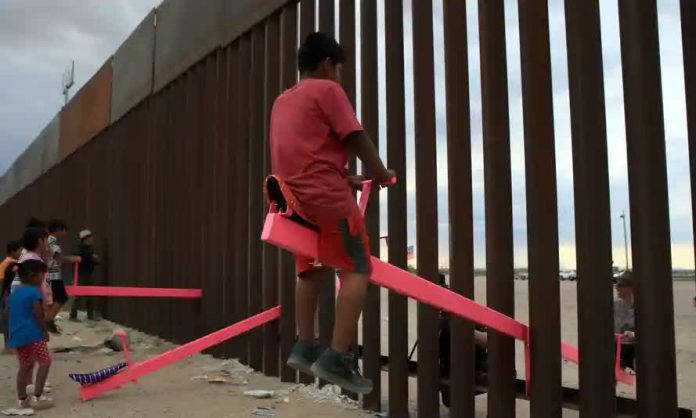 American and Mexican families enjoying the Teeter Totter Wall, which crosses the Mexican border with US, in 2019. Photograph: Luis Torres/AFP/Getty Images

A collection of bright pink seesaws that allowed people to interact over the US-Mexico border has won the prestigious Design of the Year award, with its creators saying they hoped the work encourages people to build bridges between communities.

The Teeter Totter Wall, which bridged across El Paso in Texas and Ciudad Juárez in Mexico during a 40-minute session, was described as not only feeling “symbolically important” but also highlighting “the possibility of things” by the judging panel.

The creators of the seesaws, Ronald Rael, a professor of architecture at the University of California, Berkeley, and Virginia San Fratello, an associate professor of design at San José State University, first came up with the idea a decade ago after the Secure Fence Act 2006, which started large-scale building on the border.

They said they hoped the design would help people reassess the effectiveness of borders and encourage dialogue rather than division. San Fratello said: “I think it’s become increasingly clear with the recent events in our country that we don’t need to build walls we need to build bridges.”

“Walls don’t stop people from entering our Capitol,” Rael added. “Walls don’t stop viruses from moving. We have to think about how we can be connected and be together without hurting each other.”

Videos of people interacting and playing across the border on the day-glo creations went viral in July 2019, with Rael saying they provided “a literal fulcrum” between the countries. The bright pink colouring was inspired by the femicide memorials in Ciudad Juarez, which pay homage to women murdered in the city.

The designers also took inspiration from political cartoonists and wanted to talk about the border issue in “a very frank way but using humour”.

The border wall has become a legacy issue for Donald Trump, however the designers point out that both George W Bush and Barack Obama built large stretches of barriers and deported thousands of people.

Rael said: “[Trump] ran on a platform of saying that he was going to build a wall as if some Saviour had finally arrived to build a wall but in fact two thirds of the wall had already been constructed.”

In one of his last trips as President, Donald Trump visited part of the border wall in Texas’ Rio Grande Valley with his administration boasting about having kept the president’s promise to build a “big, beautiful wall”.

According to the US Customs and Border Protection (CBP) more than 450 miles of wall had been erected during Trump’s tenure, however much of the construction replaced barriers that were already in place. The CBP stated that there were only 80 miles of barrier in areas which had previously had none.

The winning design saw off competition from more than 70 nominees, which included a 3D rendering of the virus causing Covid-19, Lee Ha Jun’s set design from Parasite, the Oscar-winning South Korean film, and the union flag stab-proof vest worn by Stormzy at Glastonbury 2019.

Awards were also given to six category winners with prizes recognising innovation in product, architecture, digital, fashion, graphics and transport.

The product award went to the vegan Impossible Burger 2.0, which was described as being crucially “beefier” than its 2016 predecessor, while the 3D rendering of the Covid-19 virus by Alissa Eckert and Dan Higgins took the graphics prize.

The vegan leather, gender neutral Telfar bag, which was described as being “the accessory of the decade” by Dazed, won the fashion prize with judges saying it was redefining “what luxury means”. Social Design Collaborative’s portable school design won the architecture prize, with the easily assembled, sustainably made Indian structure impressing the judges.

The Chilean feminist group Colectivo LASTESIS won the digital category with its protest against the use of sexual violence in the recent uprisings in the South American country. The artist Camille Walala said the work had been replicated by replicated by feminists in India, Kenya and Mexico.

The People’s Choice award was given to the brick arches made by protesters in Hong Kong, which were used to slow down police vehicles during the protests in 2019.