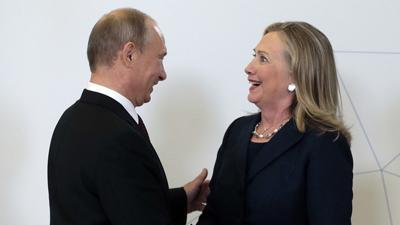 Democratic bigwigs Hillary Clinton and Nancy Pelosi have called for a probe into Russian President Vladimir Putin’s – real or entirely imagined – role in the Capitol riot, theorizing that he may have personally ordered the unrest.

The House speaker sat down with the failed 2016 presidential candidate for an interview on Clinton’s podcast, ‘You and Me Both,’ on Monday, where they discussed the bout of chaos in Washington, DC earlier this month. At one point during the conversation, Clinton argued that President Donald Trump “has other agendas” – though hastened to add that “I don’t think we yet know” what those are – wondering aloud about “who pulls his strings.”

“I would love to see his phone records to see whether he was talking to Putin the day the insurgents invaded our Capitol,” Clinton said, asking Pelosi: “Do you think we need a 9/11-type commission to investigate and report everything they can pull together and explain what happened?”

Is Twitter going to include Russiagate in its new crackdown on conspiracy theories? @Jack?

Pelosi responded in the affirmative, saying that when it comes to Trump, “all roads lead to Putin.”

“I don’t know what Putin has on him politically, financially or personally, but what happened last week was a gift to Putin. Because Putin wants to undermine democracy in our country and throughout the world,” Pelosi added confidently, despite being fuzzy on the details.

These people, unbeknownst to them, they are Putin puppets. They were doing Putin’s business when they [stormed the Capitol], at the incitement of an insurrection by the president of the United States. So yes, we should have a 9/11 commission, and there is strong support in the Congress to do that.

The remarks, made entirely free of evidence, soon triggered a wave of mockery online, with journalist Aaron Mate labeling Clinton and Pelosi’s creative theorizing as “BlueAnon” – presumably the Democratic Party’s version of the eccentric QAnon conspiracy theory popular among many conservatives. He also asked why more than two years of investigation into Trump’s alleged Russia ties were “insufficient,” as they turned up no proof for any such conspiracy.

After the break: we’ll discuss with our all-FBI panel whether more censorship power is needed to prevent conspiracy theories and disinformation from spreading.And then, our all-CIA panel asks: did Putin use a pee-pee tape to control the US, and did he order the Capitol riot??

“These people are the *last* ones with any moral standing to rant about conspiracy theories & disinformation,” wrote journalist Glenn Greenwald, adding:

Remember when Mueller spent 18 months and millions of dollars armed with a team of prosecutors and subpoena power, then closed his investigation after arresting *zero* Americans for conspiring with Russia? Let’s do it again!

Hillary, can you show me on the doll were Trump hurt you?

Others weighed in to ask whether Twitter’s policies against conspiracy theories and “dangerous disinformation” – harshly enforced for the QAnon community – would apply to Clinton and Pelosi’s baseless musings, joking that they are likely to “sow discord” in the US political scene.

In line with Pelosi and Clinton’s conspiracy-minded conjecture, an ex-romantic interest of one of the Capitol rioters came forward last week to allege the House speaker’s laptop was stolen from her office so it could be sold off to Russian intelligence. Though the alleged deal was said to have gone sour and never took place, the FBI says it has been unable to confirm whether the story holds water.

While no evidence of foreign government involvement in the Capitol riot has yet come to light, the FBI has nonetheless launched a probe into the possibility, examining in particular a series of payments equalling more than $500,000 in bitcoin made to key figures involved in organizing the protest and allegedly sent by a French national who had since committed suicide.