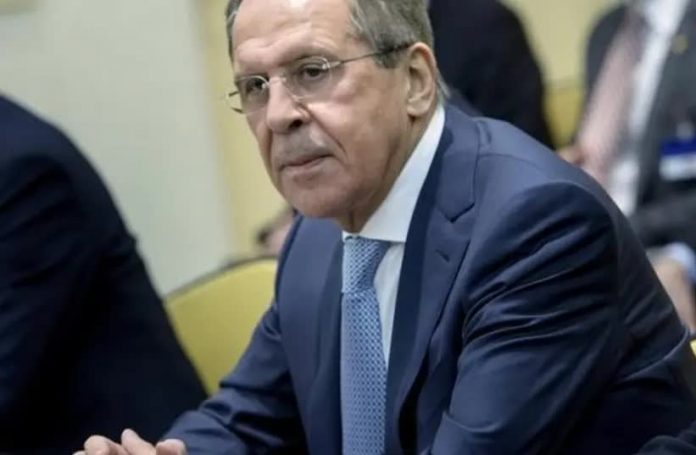 He argued that Israel should notify Russia about security threats in Syria rather than going after them. Israel’s policy is to notify Russia before attacking such threats.

Russian Foreign Minister Sergei Lavrov (C) waits with others for a P5+1 meeting at the Beau Rivage Palace Hotel in Lausanne
(photo credit: REUTERS)
Israel should report security threats in Syria rather than immediately respond to them, in order to keep the country ravaged by civil war from being turned into a battlefield against Iran, Russian Foreign Minister Sergei Lavrov said Monday, according to Russian news outlet Sputnik.

Speaking at a press conference, Lavrov criticized Israel for responding to security threats from Iran in Syria, while stressing that Moscow also does not approve of Syria being used against.

Rather, Israel should simply report these threats to Moscow.

“So, our dear Israeli colleagues, if you have facts that your state is facing threats from the Syrian territory, report the facts urgently, and we will take every measure to neutralize the threat,” Lavrov said, according to Sputnik.

Israeli forces have launched numerous strikes into Syria against Iranian targets, as part of its ongoing conflict with the Islamic Republic’s proxies. Among the most notable of recent airstrikes was last Tuesday, which targeted the city of Albukamal and Deir al-Zor, both of which are on the Euphrates River but are separated by over 120 km.

However, Russia has been highly critical of Israel’s activities in the country in the past.

In an interview with The Jerusalem Post in late December 2020, Russian Ambassador to Israel Anatoly Viktorov explained that Israel, rather than Iran, is the most destabilizing force in the Middle East, blaming it for attacking Hezbollah and Iranian forces in Syria, which he called a violation of sovereignty.

He added that “there is no way that we are approving any Israeli strikes on Syria: never in the past and never in the future.”

Lahav Harkov contributed to this report.