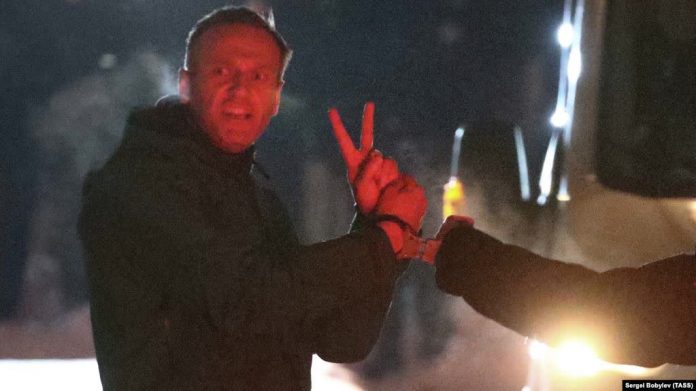 For more than a decade, Aleksei Navalny has been one of President Vladimir Putin’s most outspoken and influential critics in Russia, investigating high-level corruption, organizing protests, and traveling across the country to back opposition candidates in regional elections and nurture his network of political activists.

Authorities have responded with a campaign of near-constant harassment, jailing the Kremlin critic almost a dozen times since 2011, repeatedly raiding the offices of his Anti-Corruption Foundation, and — Navalny asserts — staging an attempted assassination by means of poisoning that led to his extended convalescence in Germany since August.

When he announced he would return to Russia on January 17, authorities made clear their intention to jail the Kremlin critic. That evening, Navalny was detained at the airport after arrival and taken to a police station outside Moscow, where he appeared before an improvised courtroom and a state prosecutor asked the judge to jail him pending a separate hearing on whether he violated the terms of his earlier parole.

But striking footage from the previous evening continued to circulate online, showing riot police dispersing and detaining Navalny supporters as they awaited his expected arrival at Moscow’s Vnukovo airport, and cars being blocked from exiting the area once news emerged that his flight was being rerouted to another airport, Sheremetyevo.

The Kremlin has denied involvement in the August poisoning —despite evidence from open-source investigations that it was carried out by the Federal Security Service (FSB) — and has gone out of its way to downplay Navalny’s significance as a politician, with Putin calling him “the Berlin patient” and “the man in question” to avoid even uttering his name. But the scenes sparked by Navalny’s repatriation, analysts say, expose the very real challenge he presents for the Kremlin and the reasons why authorities have moved so fast to jail him.

“The Kremlin has shown that for all its pretense of disinterest, it fears the man with no name,” Russia expert Mark Galeotti wrote in a column.

Navalny has made a name for himself despite facing what is arguably the Russian state’s most powerful political weapon: a network of state-controlled TV channels that are well-funded, often take cues directly from the Kremlin, and have baselessly painted him as a Western agent. A September poll by the independent Levada Center found that a majority of Russians see his poisoning as a publicity stunt, with only 15 percent blaming the Kremlin, despite the evidence of its complicity.

Nevertheless, millions have watched his video investigations alleging corruption among associates of Putin, and thousands across the country have heeded his call to attend anti-government protests several times in recent years. But after his poisoning, few Russians took to the streets in protest. And restrictions associated with the coronavirus pandemic and an accelerating clampdown on dissent in Russia have contributed to a widespread sense, surveys show, that demonstrating against injustice is too often a futile activity.

“Navalny’s arrest has failed to rouse the population as a whole,” wrote political analyst Vladislav Inozemtsev. “That’s sad, but you can’t ignore it.”

On January 18, at Navalny’s hearing outside Moscow, the judge overseeing proceedings inside the police station holding the opposition leader returned after more than 45 minutes to deliver her ruling. She ordered Navalny jailed for 30 days, long past an expected January 29 hearing regarding his alleged parole violation. Lawyers say the outcome of that process could be a 3 1/2 -year prison sentence, and Navalny could be hit with additional charges that carry a sentence of up to 10 years.

Before being led away, Navalny addressed Russians with a call for mass protests across the country on January 23 — throwing down the gauntlet both to a Kremlin reluctant to acknowledge his influence and to a population that he hopes will brave the winter cold, and a likely police crackdown, to demand his freedom.

“Don’t be scared,” Navalny said in a video posted from the makeshift courtroom, sitting against the backdrop of a folded Russian flag. “Take to the streets.”

Matthew Luxmoore is a Moscow-based correspondent for RFE/RL covering Russia and the former Soviet Union. Before joining RFE/RL in 2018, he reported for The New York Times in Moscow and has written for The Guardian, Politico, The New Republic, and Foreign Policy. He’s a graduate of Harvard’s Davis Center and a recipient of New York University’s Reporting Award and the Fulbright Alistair Cooke Journalism Award.