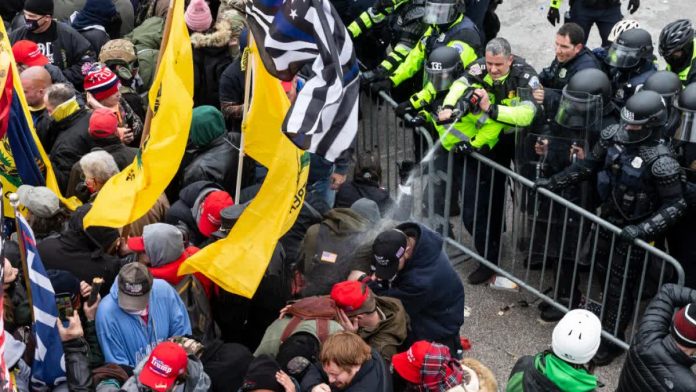 Bremmer is a foreign affairs columnist and editor-at-large at TIME. He is the president of Eurasia Group, a political-risk consultancy, and GZERO Media, a company dedicated to providing intelligent and engaging coverage of international affairs. He teaches applied geopolitics at Columbia University’s School of International and Public Affairs and his most recent book is Us vs. Them: The Failure of Globalism.

There is no advanced industrial democracy in the world more politically divided, or politically dysfunctional, than the United States today. How did the world’s most powerful country get to this point? To paraphrase a great American writer—slowly, then suddenly. The Capitol riot was not just years in the making, but decades. That’s because of three distinct features of American society that have been ignored by U.S. politicians for far too long: the enduring legacy of race, the changing nature of capitalism, and the fracturing of our collective media landscape.

Begin with race; the U.S. is far from unique in having a troubled history with race relations. But it has been particularly slow to address the structural legacy of that racism—it took nearly a century following the end of the Civil War for the 1964 Civil Rights Act to get passed, to cite just one example. Steps have been taken in recent decades to begin addressing this legacy in earnest, from anti-discrimination laws to affirmative action efforts. It has worked to bring Black Americans toward a more even footing, even paving the way for the U.S. to elect its first Black president. But as the Black Lives Matter protests this past summer made all too clear there is still much work left unfinished.

And that’s only part of the story. The other part is the backlash, as a group of white Americans—many of them white rural—are seeing their status in society threatened as a result of demographics and the recent racial reckoning. That has manifested itself both in politics—see redistricting and voter suppression schemes—as well as the violence we witnessed at the Capitol. While this anxiety has economic elements (more about that in a bit), it is best understood in terms of broader identity (and if you haven’t read Isabel Wilkerson’s Caste: The Origins of Our Discontents, you should). Years in the making, these feelings of resentment hit a fever pitch in the Trump years, culminating in last week’s deadly riot. To be clear, the U.S. is not the only country that has to deal with elements of racism in their populist movements—plenty of European countries can attest to that. But given the structural way racism has been woven into the country’s fabric combined with years of neglecting the problem, race relations have contributed mightily to the current state of U.S. political affairs.

Then there is the evolving nature of capitalism. Capitalism and the economic growth it drove is what made the U.S. the world’s preeminent superpower in the latter half of the 20th century. The entrepreneurial spirit of American-style capitalism in particular generated the kinds of innovations and growth that were exported around the world, helped along by globalization. America’s enduring faith in capitalism, and specifically the power of the individual, is the reason generations of immigrants made their way to the U.S., to give their dreams the best chance of succeeding. It’s also why the country today is home to the companies—especially technology companies—that power our modern world (at least in the West).

But there’s the flip side to U.S.-style capitalism—this capitalist, individualist economic system generates tremendous amounts of wealth, but it has also resulted in an average American worker with less of a social safety net (especially compared to European counterparts), not to mention a political system more prone to capture by moneyed special interests. Again, this is not something new that suddenly appeared with Trump’s arrival at the White House. Yet while U.S. capitalism has long allowed for inequality of outcomes, in the last thirty years we’ve increasingly seen the rise of inequality of opportunity as well. And this latter form is more devastating—when people feel that they never even got a shot to compete, let alone to succeed, they get angry. And it’s accelerating. 30 years ago, when we spoke about those who lost out from capitalism, we usually referred to a specific set of blue-collar workers left behind by free trade (in a globalized world, U.S. workers that earn more than the global average are less attractive to hire). But now we are getting to the point where automation and AI are slowly looking to displace a far wider set of workers, and across socio-economic classes. As the rise of politicians like Bernie Sanders shows, this is as much a concern for voters on the left side of the political spectrum as it is on the right. The end result is a more divided electorate, fueled by fear about how they are going to survive in an American future that gives the have’s more and the have-not’s less, with less prospect of moving from one group to the other.

Which brings us to the media. The same tech companies that power our modern world have also brought a revolution in our media consumption. Plenty are quick to point their fingers at the tech companies for fracturing our media landscape, but in hindsight the evolution of social media has followed a familiar path—talk radio, cable news and blogs were all once mass media ways of communicating that over time fragmented into more and more niche offerings until consumers could “enjoy” only those viewpoints that reinforced their own. The speed of technology is such that we’ve seen the fracturing happen much quicker with social media, but the truly disruptive element tech companies have introduced is algorithms—actively designed to capture more ad revenues and attention, often achieved by promoting extremist and misleading content. And it has come at the cost of a healthy and informed citizenry.

Compared to countries in Europe where tech platforms face more severe government regulation and must take more responsibility for content posted, the U.S. has a particular problem given its inclination to go lighter on private sector regulation. But the U.S. government won’t be able to sit on the sidelines much longer given recent developments—while plenty cheered at Twitter and Facebook’s decision to de-platform Trump in the wake of the Capitol riot, it opens serious questions about who has the democratic right to limit others’ speech. U.S. politicians will have to wade in lest they effectively cede that power to unelected tech CEOs, a recipe for a disaster of a whole other sort.

There are other contributing factors to today’s U.S. political divisions, but for me, these three are the most structural, and the most crucial. Even more worrying, no matter what happens with recent impeachment efforts, all three of these trends are set to grow stronger over the near-term. Absent more earnest efforts across the political spectrum to deal with these issues—and make the political compromises necessary to truly address them—these are problems that will grow worse.

Joe Biden faces numerous challenges when he takes office. And while tackling the pandemic may be his most immediate challenge, it isn’t his more daunting. Vaccines can end pandemics after all, but we don’t have a vaccine for our political divisions.