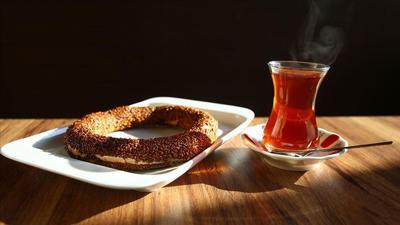 Turkey’s Culture and Tourism Ministry has prepared a list of the country’s most popular street food anyone can find in all 81 provinces across the nation, with “simit,” which is Turkish bagel, fish sandwiches and chestnuts taking the lead.

“Tantuni,” which is a wrap with small cubes of meat seasoned with hot peppers and onions, stuffed mussels, baked potatoes, chicken with rice, çiğ köfte, fresh almond on ice and şalgam follow suit on the list.

Although Istanbul is Turkey’s gastronomical center with plenty of local and international restaurants, street food is also worth trying for tourists, according to goturkey.com, a website set up by the ministry to promote the country’s tourist hotspots.

According to the ministry, the country’s street food culture goes back to the history of Turks.

“Turkish people come from a nomadic background, and this is one of the main reasons why street food culture is extremely rich and popular all across the country,” the website said.

“The culture of street food is like a gold mine in Turkey. In each city, you can encounter street flavors that are unique to the region and that can appeal to everyone’s plate,” it said, while placing simit atop the list.

Describing simit as “a round-shaped bagel-like bread covered with sesame seeds,” the ministry recommends people to eat simit “on its own or with cheese and a cup of tea.”

“In Istanbul, many people share this delicious snack with seagulls as they cross the Bosphorus on the ferry,” it added.

“Its taste lingers in your mouth,” it said.

Then come chestnuts, the street delight that, according to the ministry, heralds the beginning of the winter.

When winter comes, one can find a chestnut seller on every corner in almost every city in Turkey.

“Tantuni,” or “wrapped chopped meat with parsley, tomatoes, green peppers, and onions,” is the fourth most popular street food on the list.

Another irresistible street food, the “midye dolma,” (stuffed mussels) is ranked mid-way on the list, as Turks can find sellers almost anywhere on the streets to taste the experimental popular food.

“Once you start, you might not be able to stop,” the ministry said, referring to a common practice of its fans eating one after another.

“Kumpir” is sixth on the list, with the ministry urging people not to miss out on it.

It recommended customers to eat kumpir with sausages, pickles, sweetcorn and olives.

“Chicken with rice” comes after kumpir on the list. It is recommended to be eaten alongside a plate of pickles and a glass of ayran, a Turkish yoghurt-based drink.

“Çiğ köfte” (raw meatballs) is unarguably one of the most popular foods in the country, ranking eighth on the list. Despite its name, çiğ köfte does not actually consist of meat mostly, but is made of bulgur and paste as well as spicy herbs. Again, ayran is strongly recommended with it, according to the website.

“Fresh almond on ice” and a spicy turnip drink named “şalgam” are the last items on the list that the ministry recommends to all tourists.