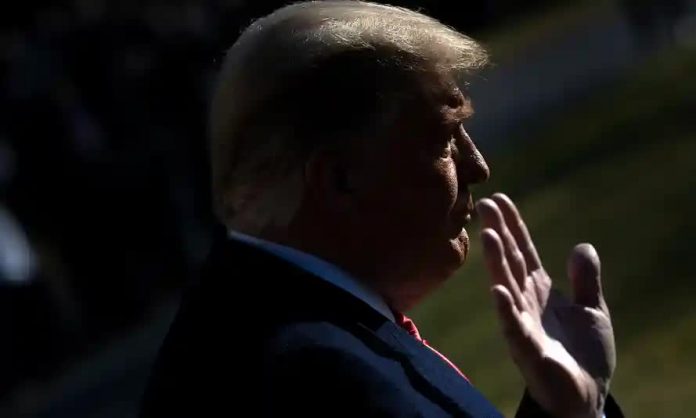 Invitations for the event have been circulated to Trump supporters, former administration officials and other backers. Photograph: Brendan Smialowski/AFP/Getty Images

Donald Trump is planning an early morning sendoff event for himself at a military airfield in Maryland on Wednesday several hours before his successor, Joe Biden, is inaugurated as the 46th US president at the Capitol in Washington DC.

For his last presidential ceremony, Trump reportedly wants an ostentatious military parade and an official armed forces farewell as the commander-in-chief, as well as a large crowd of supporters, selected backers and current and former officials in his administration and their guests at a huge red-carpet affair.

But latest reports indicate that Trump, who is facing an impeachment trial in the Senate and a number of criminal and civil investigations, will not be afforded a big military sendoff just two weeks after a deadly insurrection at the US Capitol that followed his exhorting supporters to fight to overturn the election.

Invitations have been issued from the White House for an event taking place at Joint Base Andrews, the military base in Maryland used by Air Force One, at 8am on Wednesday – four hours before Biden will take his oath.

Many details of the ceremony are not yet clear, although attendees will have to make a pre-dawn start and have been told to arrive by 7.15am, when temperatures are forecast to be below freezing.

In his last few hours as president, Trump will fly to his private Mar-a-Lago resort and residence in Palm Beach, Florida, aboard the Air Force One jumbo jet for the last time in a presidential capacity, ensuring he and his wife Melania are almost 1,000 miles away from the White House and Capitol when Biden takes over.

Air Force One will then be at the disposal of Biden. Trump would have had to have permission from the Democrat who defeated him to use it if he had waited to leave Washington until Biden was sworn in.

According to some reports, a 21-gun salute has been under consideration for the event at Andrews, and officials are considering an elaborate ceremony that would have the feel of a state visit.

Senior Pentagon officials reportedly told the security and intelligence news website Defense One that no military farewell was being planned for the commander-in-chief, unlike ceremonies for Ronald Reagan, George HW and George W Bush, Bill Clinton and Barack Obama.

With the sun barely up at the start of an expected-to-be-chilly Wednesday, a minimal group of staff still left in a rapidly emptying White House will see off Trump as he takes one last walk across the lawn to enter Marine One, the presidential helicopter, for the short flight to Andrews just a few miles away.

Strict security arrangements in place for the inauguration, following the 6 January violence , have also limited the number of people who can attend the White House departure.

Four years ago, Barack and Michelle Obama hosted Donald and Melania Trump for tea at the White House before traveling to the ceremony to watch Trump inaugurated as the 45th US president.

But Trump has made it clear he would become the only president in a century and a half not to attend his successor’s inauguration and only the fourth in history not to do so, with the plans for his premature departure unprecedented.

Vice-President Mike Pence is attending Biden’s inauguration, but it is not yet known if he will attend Trump’s farewell at either the White House or Joint Base Andrews beforehand.

Pence traveled to thank troops in California and New York over the weekend as part of a farewell from the Trump-Pence administration, engagements that would have been expected to be carried out by the president.

Trump has not been seen in public since he traveled to the US-Mexico border last Tuesday. In recent weeks he has not visited the US military. And has not visited or spoken of healthcare workers overwhelmed at hospitals and vaccination sites as the US coronavirus death toll approaches 400,000.

The Bidens may be able to see and hear Trump departing aboard Marine One as they are staying close to the White House the night before the inauguration.

There is no word on whether Trump will call Biden or leave the traditional letter to his successor upon the Resolute desk in the Oval Office.

Reports on Monday afternoon said that the Bidens would be greeted by the White House chief usher on Wednesday, whereas traditionally it would be the departing president and first lady.

They also said Melania Trump would become the first modern first lady not to invite her successor for a tour of the private living quarters.

Workers have already hung bunting that reads “2021 Biden-Harris Inauguration” from temporary stands across from the White House’s north portico, visible from the third-storey residence, CNN reported.

The cable network also reported that on the day the White House Military Office will ensure there are several “nuclear footballs” available, the heavy briefcase that is always carried near the president with codes to launch weapons in case of nuclear attack.

One such football will reportedly travel with Trump to Florida and his codes will be deactivated by the time Biden is sworn in at noon on Wednesday, when an aide carrying another nuclear football and working codes will then begin to shadow the new president.

The invitation for Trump’s sendoff specifies that masks must be worn .

Late last year, Trump was criticised for hosting a series of indoor and outdoor events at the White House where social distancing and mask-wearing guidelines were not enforced, leading to several high-profile Covid cases, with the gatherings described as “super-spreader” events.