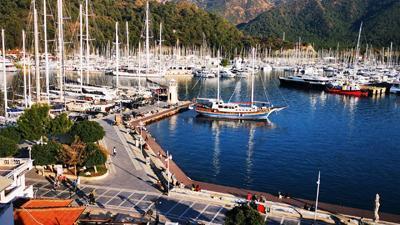 Muğla, a Turkish summer resort region on the Mediterranean, remained a hotspot for British tourists despite the pandemic.

The region contains some of Turkey‘s best-known resorts such as Marmaris, Bodrum, Dalaman, Köyceğiz, and Datça, which British tourists prefer.

According to the data shared by tourism authorities in Muğla, out of almost 700,000 tourists who visited the province in 2020, around 310,000 were British, followed by Russians, Ukrainians, Poles, and Germans.

Speaking to Anadolu Agency, Bulent Bulbuloglu, a prominent representative of the region’s tourism industry, remarked that Muğla is a well-established destination for British tourists.

He noted that tourism figures realized in 2020, notwithstanding all the negative factors caused by the pandemic, give them a reason to be hopeful.

Another tourism industry representative of the Muğla region, Suat Esin, said they were particularly pleased with touristic facilities’ occupancy rates during July and August.

“If a major hurdle does not emerge in the course of vaccination, I believe that we will have a great tourism season in 2021,” he added.