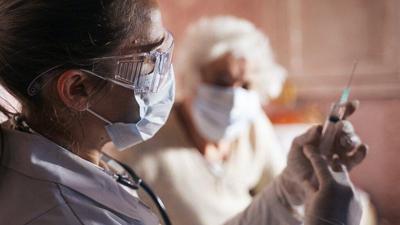 Turkey’s vaccination campaign is proceeding to its next step, focusing on the very elderly and those in institutional care, the country’s health minister said on Jan. 18.

“As of tomorrow [Tuesday], we will start the vaccination of people staying in care and nursing homes, and of those caring for them,” Fahrettin Koca said on Twitter.

He said people 90 and above in the country will also start receiving their first shots on the same day, adding that they will get their jabs at their homes or residences without the need to visit health institutions.

He said that according to the schedule, the inoculation of Turkey’s healthcare workers will be completed by Wednesday, adding that over 830,000 workers have been vaccinated since last Thursday, when the campaign kicked off.

The first batch of 3 million doses of the vaccine developed by China’s Sinovac arrived in Turkey on Dec. 30.

In addition to healthcare workers, President Recep Tayyip Erdoğan and other top officials were also vaccinated to help encourage the public.

On Wednesday, Health Minister Fahrettin Koca became the first person in the country to receive the Chinese vaccine jab after Turkey approved CoronaVac for emergency use.