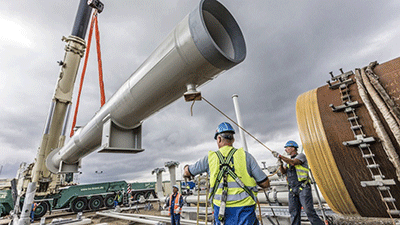 A Russian ship tasked with laying pipes to complete construction of the controversial Nord Stream 2 gas pipeline will be placed under sanctions by the U.S., German officials said Monday.

“This is the announcement of a sanction of a Russian ship. We take note of the announcement with regret,” a ministry spokesman told AFP, confirming a report in the Handelsblatt newspaper that Washington would make the decision official on Tuesday.

Work on the 10-billion-euro ($11 billion) pipeline resumed in German waters in December after being suspended for nearly a year because of the threat of U.S. sanctions.

Signed off by U.S. President Donald Trump in late 2019, the measures threatened asset freezes and visa restrictions for companies involved in the construction.

According to the Handelsblatt, the U.S. informed Germany and several European countries that it would censure the pipeline laying vessel “Fortuna,” owned by the Russian company KVT-RUS.

The ship helped work to restart on the site in December by laying a short section of pipeline in German waters.

The decision comes just ahead of Joe Biden’s inauguration as U.S. president on Wednesday.

Trump’s administration repeatedly criticized Germany and other European nations for relying on energy from Russia.

Besides Russian giant Gazprom, which has a majority stake in the project, the international consortium involved in the pipeline includes European players such as Germany’s Wintershall and Uniper groups, the Dutch-British giant Shell, France’s Engie and Austria’s OMV.