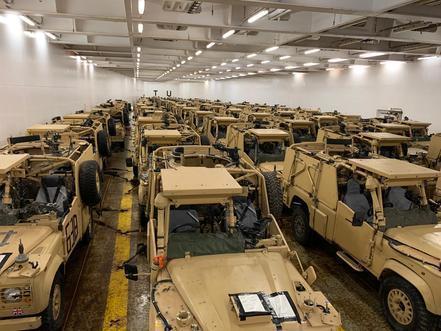 A ship will on Monday set sail from the south coast of the UK bound for Lebanon with 100 armored patrol vehicles (Land Rover RWMIK) donated by the British Government to the Lebanese Armed Forces (LAF), the British embassy said.

These vehicles, worth £1.5 million, will “further reinforce the stability on the Lebanese border with Syria and help the LAF to counter efforts by terrorists and smugglers to cross into the country,” the embassy said in a statement.

“With UK support in recent years, we have seen the deployment of four Land Border Regiments (LBRs), the construction of over 75 border towers, provision of 350 Land Rovers, and training of over 11,000 LAF personnel to effectively counter extremists and smugglers seeking to infiltrating Lebanon from Syria,” the statement added.

Chargé d’Affairs a.i. Martin Longden said: “I am delighted that the UK has been able to help with this donation. These vehicles will make a real difference to the work of the Land Border Regiments, whose efforts make life safer for all communities in Lebanon.”

“It’s a great practical example of the friendship and collaboration between the armed forces of our two countries, and the UK’s genuine commitment to a strong and stable Lebanon,” he added.