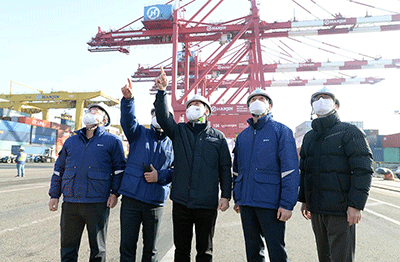 Many of the women are trading poverty for alienation or even abuse.

Seoul is encouraging Korean men to look for brides abroad. (Korean Trade Ministry)
With a flick of the remote one summer day in 2007, Son Sang Hyok’s life changed forever.

Son turned on the television in his Seoul apartment and saw a young Uzbek woman urging Korean men to travel to Uzbekistan, promising they would find the wives of their dreams. Uzbek women, she said, are not only beautiful. They also work hard.

The ad was likely part of a government initiative to battle South Korea’s falling fertility rates and declining population. In response, over the past 20 years bachelors from all corners of Korea have set out across Asia looking for brides. Enticed by the television ad, Son bought a ticket to Tashkent.

Within a few weeks, Son had found his wife-to-be, film actress Dildora Hashimova.

“I knew immediately she would be able to adjust to life in South Korea,” Son recalled in an interview, emphasizing an important factor in his decision to propose.

Within a year, the couple married and Hashimova joined Son in Seoul, where they later had a daughter. Asked what attracted her to Son, Hashimova said that besides love, she could see herself living and having a family in Korea, a factor she considers “essential” in the success of her marriage.

“Our cultures are very similar… so I knew that [the marriage] would work,” said Hashimova, adding that she knew a lot about her husband’s culture from watching the Korean soap operas airing in Uzbekistan at the time.

Today Hashimova hosts a television show on a Korean travel channel. She’s also an entrepreneur with her own Korean language school for immigrants in Seoul. And to the delight of her 162,000 followers, she often posts glamorous selfies on her Instagram account with updates in Uzbek and Korean.

But Hashimova knows her story is more the exception than the rule.

Korean media is full of stories about sexual abuse, bride trafficking, and the shady brokers that make international marriages a big industry in the country.

Marriages to foreign-born women took off in Korea after the new millennium, rising from 2.1 percent of the total in 2000 to 7.4 percent in 2019. The vast majority are from Vietnam, China and Thailand. Uzbekistan, the most populous Central Asian nation, provides the most brides from the former Soviet Union. Korean marriages to Uzbek women peaked at 492 in 2008. In the last 10 years, the number has averaged 278 per year, according to Korea’s state statistics agency.

Many of these pairings are subsidized by local governments in Korea. In 2019, 35 municipalities in farming and fishing communities reportedly offered local men up to 10 million won (about $9,100) toward the expense of procuring a foreign bride. Uzbek women are said to be the most expensive, costing on average 18.3 million won ($16,700) – likely due to higher airfare costs, expectations the groom will pay a cash dowry to the bride’s family, and the need to hire a matchmaker.

“Madina” grew up poor in Uzbekistan, where her waitressing job provided barely enough to support herself and her young child by her first husband.

“There were days we lived in the streets,” she recalled. “I decided to marry someone who is not from my religion – a Korean man – for my child’s future,” said Madina, 48, who requested this pseudonym for fear of public shaming.

Madina, who met her husband through a friend, found married life in Korea much harder than Hashimova. Though both women struggled with the language at first, Madina said that even after improving her Korean skills her relationship with her husband and his family remained poor.

“My partner and I were just different, and it was hard to live with his mother, who refused to share anything,” she said. “I eventually ran back to Uzbekistan but was unable to withstand the gossip and the finger pointing, and so again I came back [to Korea].”

Uzbek women are often introduced to Korean men by private marriage brokers. Though illegal in Uzbekistan, hundreds of these agencies operate in Korea. One source close to the business in Tashkent told Eurasianet that the brokers often work with language schools and religious organizations.

Because they operate in the shadows, few marriage brokers in Uzbekistan are willing to discuss the mechanics or economics of the trade. But one contacted by Eurasianet made the assumption that your correspondent was a potential bride, requesting photos and information about her weight, height, education and any prior marriages. When questioned about fees and logistics, the matchmaker replied that the groom pays for everything, and that the bride need not worry about finances, adding, “when two people love one another, money isn’t necessary.”

These brokers likely fear not only prosecution, but public scrutiny. A recent viral video on Uzbek social media highlighted negative views about intercultural marriage. In the video, a Korean man urges several dozen Uzbek women through a translator to study hard for their “dear husbands in Korea,” so that they can do more than “just cook for them.” The man was likely a marriage broker.

Many comments under the video, primarily written by Uzbek men, compared the scene to “legalized human trafficking.” Some cursed the women. Others criticized them for marrying non-Muslim men; in one video response that was later taken offline, an imam condemned the women.

An Uzbek graduate student in Seoul who researches the bride business says the story is more complicated than these commentators understand, especially from the women’s perspectives.

“There were 28 women in that video, who were set on leaving and beginning a new life abroad, some already in love,” said the researcher, who declined to be identified. “Now they’re all delayed and distraught,” she added, describing how the public reaction drove many of the marriage brokers into hiding.

South Korean officials tightened laws on marrying foreigners in 2014 in an effort to battle what the Justice Ministry called “abnormal” marriages, where men and women of different nationalities were reportedly paired by brokers in less than five days. Under new rules, both parties must now be financially independent and communicate in the same language. Officials also opened crisis hotlines where immigrant women can report abuse.

“The saddest part is that they don’t call until it’s the worst-case scenario,” said Bakhtiyor Mukhammad, an Uzbek living in South Korea who works with Uzbek victims of domestic abuse. Mukhammad helps collect evidence to be used in criminal cases and says that the fear of living in a foreign country alone or being deported keeps the “many, too many” Uzbek brides he knows from reporting abuse.

“Love stories are rare,” said Mukhammad. “Many [of the Uzbek brides] are just lost, too weak to protect themselves.”

“I didn’t have any romantic feelings”

Ziyoda Hamidova was raised in a Tashkent orphanage. To cope with loneliness, she began attending church, where she met Korean people for the first time.

“I loved hearing about Korea, and often wished I could go,” said Hamidova about her initial exposure to Korean culture.

In 2010, she went to Seoul on a three-week trip at the encouragement of fellow congregants and instantly knew she wanted to emigrate.

“I watched all the dramas, knew all the songs. I knew I had to live [in Korea] to be happy.”

When she returned to Uzbekistan, Hamidova met her husband at a Korean language center. At first she regarded him with “lukewarm feelings.”

“I didn’t have any romantic feelings toward my husband when I married him,” she said. “He was my friend, and when he said he loved me, I knew I would live with a great man in the country of my dreams.”

Hamidova eventually grew to love her husband and they now live in Seoul with their two children.

“I still haven’t gotten citizenship here, because I don’t want to have problems visiting Uzbekistan,” she said, citing an Uzbek law forbidding dual citizenship. “[Uzbekistan] is still my home.”

Ezoza Yakvalkhodjieva is a freelance journalist living in New York.