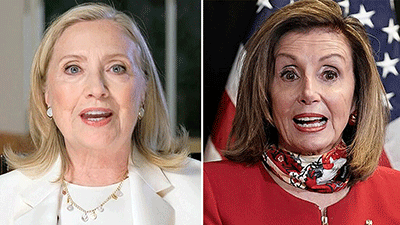 ‘What if I told you not everything is about Russia,’ one critic reacted

Hillary Clinton and Nancy Pelosi are facing backlash from their own side of the aisle over their ongoing pursuit to find any ties between President Trump and Russia.

Clinton suggested, in an interview with the House speaker that aired on her podcast “You and Me Both”, that her 2016 rival had “other agendas” while serving as president and predicted that the truth will eventually be known.

“I hope, historically, we will find out who he’s beholden to, who pulls his strings. I would love to see his phone records to see if he was talking to [Russian President Vladimir] Putin the day the insurgents invaded our Capitol,” Clinton said.

The former secretary of state then asked Pelosi if she agreed with setting up a “9/11-type commission” to investigate “everything” that happened.

“I do,” Pelosi quickly responded, before reiterating her belief that “all roads lead to Putin” when it comes to President Trump.

“I don’t know what Putin has on him politically, financially, or personally, but what happened last week was a gift to Putin because Putin wants to undermine democracy in our country and throughout the world,” the speaker said. “And these people, unbeknownst to them, are Putin puppets.”

Clinton shared the exchange on Twitter, writing: “[email protected] and I agree: Congress needs to establish an investigative body like the 9/11 Commission to determine Trump’s ties to Putin so we can repair the damage to our national security and prevent a puppet from occupying the presidency ever again.”

While Clinton and Pelosi’s Trump-Russia obsession had conservative critics howling on social media, many on the left also piled on.

“What if I told you not everything is about Russia,” progressive commentator Kyle Kulinski wrote.

“She might want to be careful advocating for Big Tech to slow the spread of conspiracy theories, her podcast might get suppressed,” The Intercept DC bureau chief Ryan Grim warned Clinton.

“Remember when Mueller spent 18 months and millions of dollars armed with a team of prosecutors and subpoena power, then closed his investigation after arresting *zero* Americans for conspiring with Russia? Let’s do it again! Anything to distract from how rotted neoliberalism is,” journalist Glenn Greenwald said.

“lol they’re never going to give up on Trump/Russia even after 4+ hyper-obsessive years, a full Special Counsel investigation, endless Congressional inquiries, and now even after he’s relegated to exile in Mar-a-Lago,” journalist Michael Tracey similarly wrote.

“A violent mob of AMERICAN right wing extremists stormed the Capitol at the encouragement of Trump and other Republican leaders, not Putin. What happened is serious and dangerous, why are Democrats this obsessed with making it about Putin while missing the real threat?” Soapbox host Rania Khalek wondered.

The Grayzone’s Aaron Maté compared the Russian collusion narrative to a leftwing QAnon.

“Have you heard of #BlueAnon?” Maté asked. “Here, two top members speculate that Trump spoke to Putin before the MAGA riot and call for a 9/11-style commission on Trump-Putin ties (FBI & Congressional probes were presumably insufficient).”

“As this cult’s mantra goes: ‘All roads lead to Putin,”  Maté added. 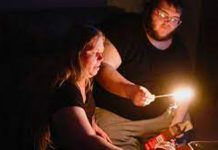 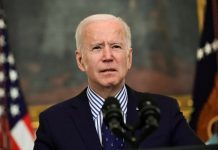 Biden Forgets to Name Third Reason Why He Ran for Presidency, Claims He ‘Drove’ 18-Wheeler Once