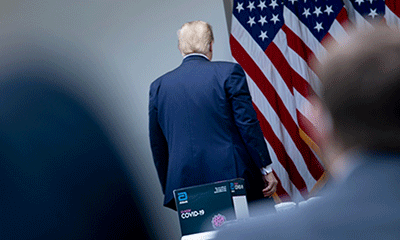 https://www.bbc.com-US President Donald Trump has made his farewell address before leaving office, saying: “We did what we came to do – and so much more.”

In a video posted on YouTube, he said he took on “the tough battles, the hardest fights… because that’s what you elected me to do”.

Mr Trump has still not fully accepted the result of last November’s election, which he lost to Democrat Joe Biden.

Mr Biden will be sworn in as president on Wednesday.

The last two weeks of Mr Trump’s term have been dominated by the fallout from the deadly riot on Capitol Hill, when a mob of his supporters stormed Congress, seeking to overturn the election result.

“Political violence is an attack on everything we cherish as Americans. It can never be tolerated,” Mr Trump said in his video, in which he did not acknowledge his successor by name.

What else did Trump say?

Mr Trump himself has been impeached for “incitement of insurrection” over the attack and will face trial in the Senate after he leaves office. If convicted, he could be barred from standing for public office.

He is the first president in US history to be impeached twice. At his first trial, he was cleared on charges relating to dealings with Ukraine by the majority from his own Republican Party.

The politically motivated violence has overshadowed the growing toll from the coronavirus pandemic, in which more than 400,000 Americans have died and 24 million have been infected.

In his message, Mr Trump said his administration built “the greatest economy in the history of the world”.

US stock markets have rebounded from the coronavirus pandemic, with the tech-heavy Nasdaq index up 42% in 2020, and the wider S&P 500 up 15%.

However, the rest of the economy is facing more of a struggle. Employers cut jobs in December, ending a string of job gains. Retail sales have dropped in recent months, while jobless claims rise.

“Our agenda was not about right or left, it wasn’t about Republican or Democrat, but about the good of a nation, and that means the whole nation,” Mr Trump said.

He leaves office with an approval rating of 34%, a record low for a departing president.

Donald Trump, in his 20-minute pre-recorded farewell speech, said his administration did what it came to do and more.

One can debate the significance of his accomplishments – whether 400 miles (640km) of rebuilt border wall, tax cuts, regulatory rollbacks, confirmed judges, trade wars and modest Mid-East diplomatic agreements amount to much in the way of substantive achievement.

But at least in one way, his boast is certainly true. Trump ran for president in 2016 to shake up the existing political order. He campaigned as an outsider giving voice to those who distrusted the establishment and felt the system no longer worked for them.

“I took on the tough battles, the hardest fights, the most difficult choices because that’s what you elected me to do,” he said.

The unrest and resentment that Trump rode to the White House crested and crashed on the US Capitol two weeks ago, leaving behind wreckage – literal and metaphorical – that will take time and effort to clear.

After four years of shattered norms and traditions, of turning expectations of presidential behaviour on their head, Trump leaves US government changed – fundamentally and, perhaps, irreversibly.

That, at least, was a promise made and a promise kept.

How is Biden preparing for office?

Mr Biden and his wife Jill Biden left their home state of Delaware on Tuesday to return to Washington, where the incoming president served as a senator for 36 years before becoming vice-president to Barack Obama from 2008 to 2016.

“When I die, Delaware will be written on my heart,” he said in an emotional farewell speech.

This will be an inauguration like no other: Washington is under heavy security after the Capitol riots, with thousands of reserve soldiers from the National Guard deployed and metal fences around the White House.

Only a limited number of people will be allowed on to the National Mall to witness his swearing in, in contrast to the hundreds of thousands who usually attend.

Among those staying away will be Mr Trump. He flies to Florida on Wednesday morning – the first president to skip his successor’s inauguration since Andrew Johnson in 1869.