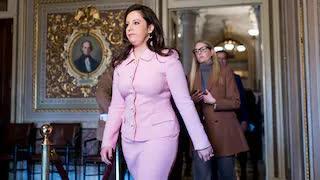 ‘The shameful statement is not only inherently sexist, but also hateful, abusive,’ she wrote

Rep. Elise Stefanik blasted the Albany, N.Y.-based newspaper Times Union as “truly heinous and wildly inappropriate” for publishing a now-deleted blog that mocked her as “childless.”

Stefanik, R-N.Y., and her husband, Matt Manda, issued a scathing joint statement demanding a complete retraction from the Times Union.

“As a young couple, we have developed a thick skin over many years as we have become accustomed to repeated sexist smears in media coverage. However, the Times Union’s decision to publish an article that mocked us as “childless” is a new low and is truly heinous and wildly impropriate is truly heinous and wildly impropriate. The shameful statement is not only inherently sexist, but also hateful, abusive, and heartless. The Times Union publisher, editors, and staff have clearly let the paper’s standards sink so low that they have chosen to embrace sexist scum and content under the masthead. They should be ashamed,” Stefanik’s statement began.

“We not only require a complete retraction, but we also demand an immediate public apology and explanation as to how this was allowed to be published in the Times Union and who will be held responsible and accountable,” the statement continued.

“We are grateful to the thousands of constituents who have encouraged and prayed for us over the years. Thank you for your kind words and best wishes. Like millions of families, we hope and pray that we will be blessed by becoming parents.”

The story that offended the Republican lawmaker was co-written by Peter Marino and SUNY-Adirondack professor Lale Davidson. It was a blog post that the newspaper labeled as “a work of fiction” and seemed to tell a completely made-up tale of Stefanik visiting first-graders at school. The piece mocked Stefanik for a variety of jabs, including her education and her stance on the coronavirus before the remark that sparked the demand for an apology.

“I myself am childless because I am a rising star in the Republican Party, and family planning is possible by way of the contraception paid for by my excellent taxpayer-provided healthcare plan,” Marino and Davidson wrote in the fictional account of Stefanik speaking to children.

The now-deleted blog post went on to mock Stefanik and President Trump, and offered a fictional account of Republican lawmakers defending the angry mob that stormed the Capitol on Jan. 6.

The blog has since been removed from the Times Union website, but was still displayed on Davidson’s personal site as of Tuesday afternoon.

“The Times Union has for years hosted a series of community-generated blogs covering a range of topics. They are not edited by Times Union staff, but are expected to meet a set of civility guidelines. A post that recently appeared on one of these sites was brought to our attention, and, upon our review, we felt it did not meet those guidelines. We pulled it down immediately along with all earlier posts on that blog,” Times union editor and vice president Casey Seiler told Fox News.