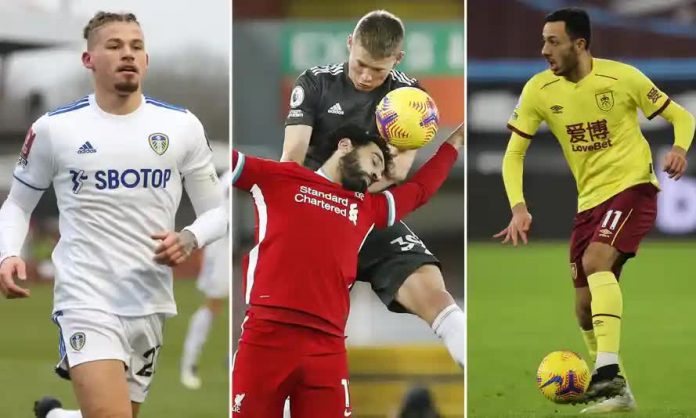 There has been recent evidence that Ole Gunnar Solskjær’s adherence to the lessons learned at Sir Alex Ferguson’s feet was wavering. His Manchester United have lately shown something of their own identity, but here Solskjær used a classic Fergie blueprint. Even when United were far superior to Liverpool, Anfield was where the old master’s team would sit deep and try to score on the counter, or from set pieces. It is not difficult to imagine unsung players like Scott McTominay and Fred being handed a Ferguson detail of sweeping up the bits and pieces in midfield in the mould of a Phil Neville or Quinton Fortune. There was to be no unlikely goalscoring hero in the mould of a John O’Shea, Diego Forlan or Gary Pallister. Instead, Sunday will be recalled in future for Anfield’s emptiness, a match endured rather than enjoyed. And Ferguson, even during his imperial period, would probably have been happy with a point. John Brewin

Kevin De Bruyne recorded his 100th assist for Manchester City on Sunday night, swinging an inch-perfect cross in to allow John Stones to head home his first league goal for the club. It also nudged the Belgian into the Premier League’s top 10 all-time goal creators; he has topped the assist charts in three of the last four seasons and is second only to Harry Kane this term. A running joke among City fans is that De Bruyne would rather add assists to his tally than goals, but his interventions this season are far from stat-padding. He set up the solitary goal in wins against Sheffield United, Brighton and Southampton, the pivotal second for Phil Foden at Stamford Bridge, and Gabriel Jesus’ equaliser against Liverpool. De Bruyne’s missed penalty in that match was an outlier; had he scored, City would be top of the table now. If he keeps up his current form, it feels like a matter of time. Niall McVeigh

Brendan Rodgers is confident Leicester have greater maturity, experience and strength in depth to avoid a similar drop-off to last season. This win cemented their top-four place as key players such as Ricardo Pereira and Caglar Soyuncu edge back into contention after a spell with injuries during which James Justin and Wesley Fofana have proved superb deputies. “We’re certainly not going to win every game between now and the end of the season but we’re going to do our best,” Rodgers said. “If you look at the team a year on, we’ve made developments both tactically and also from a mentality stance. That’s just maturity. It’s important you learn from mistakes but the biggest common denominator in our drop-off at the end of last season was we were missing our best players without that depth of squad.” Peter Lansley

It was a goal that evoked memories of Frank Lampard at his best: a midfielder driving into the box and floating into space before sending a loose ball into the net. Those late runs were Lampard’s signature move as a player and now, as Chelsea’s manager, he wants similar from Mason Mount after his winner at Fulham. It was Mount’s first Premier League goal since September and although he brings energy and creativity to midfield, he is aware he needs to find the net more consistently. “There are times when we have the ball he can just get higher up the pitch,” Lampard said. “When he gets older it’ll be very natural for him to understand the moments he can get in there. If you keep getting in there he will score more. Rather than a 25-yarder, goals in the box are what Mason can definitely add.” Jacob Steinberg

Sheffield United are going down with a whimper. David McGoldrick’s flicked header was only their 10th goal of the Premier League campaign, six of which have been scored by the striker. Alongside the veteran forward against Spurs was Oliver Burke, a winger by trade who scored once in 31 appearances while on loan at Alavés last season. On the bench was Rhian Brewster, who scored 10 in 20 for Swansea last season but is yet to get off the mark for the Blades. Brewster is the club’s record signing but has only started six league matches, completing two of them. When the Blades are inevitably relegated, Brewster will be the man needed to fire them straight back up – so it is worth getting him in the team sooner rather than later to ensure he progresses under Chris Wilder. The young forward risks going backwards sat on the bench, potentially harming United’s chances of returning to the top flight. Will Unwin

A week is a long time in this rapid, relentless season; a month feels like an eternity. It was one month ago on Monday that Liverpool tore Crystal Palace apart, a 7-0 away win off the back of a win over Spurs that had some pundits asking exactly who could stop them defending their title. Jürgen Klopp’s team have scored one league goal since, and that came early on against West Brom. The barren run now stands at 348 minutes (plus stoppage time) after Manchester United held the champions at bay with relative ease. The deployment of Takumi Minamino was effective at Selhurst Park, with the Japanese winger opening the scoring and completing the 90 minutes, allowing Klopp to rotate Sadio Mané and Mohamed Salah. It is strange that since then, Minamino has not played a minute while Liverpool’s weary first-choice front three have started every league game. Minamino’s time at Liverpool has been hit-and-miss, but he surely deserves a chance to make an impact against Burnley on Thursday. Niall McVeigh

Alexis Mac Allister was arguably the game’s brightest star but Ben White deserves a big share of the plaudits for his integral role in Brighton’s first Premier League win since November. The former loanee Leeds centre-half showed Marcelo Bielsa and company what they’re missing courtesy of an incisive performance in his new central-midfield habitat. Many games are effectively won and lost in that department and White’s part in the visitors’ dominance, not properly reflected by the slender scoreline, cannot be overestimated. His display also emphasised how much Leeds depend on their own midfield anchor, Kalvin Phillips, whose absence through suspension surely played a big part in a third successive defeat for a side whose next fixture – at Newcastle on Tuesday week – has suddenly assumed an unforeseen importance. Louise Taylor

Nuno Espírito Santo had hoped a win in the first Black Country derby for nine years would lift Wolves out of a rut. Instead his team fell to an error‑strewn home defeat against West Brom that felt like a new low. When good players keep erring, something is on their minds. Adapting to a new system while trying to integrate inexperienced players to replace stalwarts is taking a toll. If the club do not buy reinforcements in this transfer window – especially a striker, even though Fabio Silva scored his second Premier League goal on Saturday and Patrick Cutrone has been recalled from loan – then Wolves will continue to look like a mishmash of a side. It does not help that Nuno is persisting with a back four rather than the three‑man defence to which Wolves had been accustomed. Paul Doyle

For Sean Dyche, the solution is simple: Burnley need to score more goals. Dyche’s side have managed just nine all season, the lowest in the division, but still find themselves outside the relegation zone with almost half of the campaign completed. The form of Dwight McNeil – who impressed in the 1-0 defeat at the London Stadium after being brought on at half-time – could be key for their chances of staying out of trouble after Burnley travel to Anfield on Thursday. “I thought there was a lot of creativity, especially from Dwight when he came on,” Dyche said. “The only question I have made of our wide players is to get to the far post in attacking situations. Defensively, generally we have been solid but it is now about operating better in the final third, no matter who is playing.” Ed Aarons

10) Shape of relegation race is in the balance

While the top of the table is in a constant state of flux, the current bottom five have been in place since mid-October. Logic dictated that three teams from this group would go down, but recent results may have changed the picture. Burnley’s revival saw them briefly leapfrog Brighton, but the Seagulls eased the pressure with victory at Leeds. Promoted Fulham and West Brom have improved in recent weeks but must keep picking up points to stop the gap from growing. They will contest a six-pointer at the Hawthorns in 12 days while Fulham face Brighton, West Brom go to Burnley and both teams play Sheffield United in the next month. It is hard to envisage both sides escaping but if either can put a run together, the drifting quartet above the bottom five – Leeds, Wolves, Palace and Newcastle – might finally have cause to look over their shoulders. Niall McVeigh