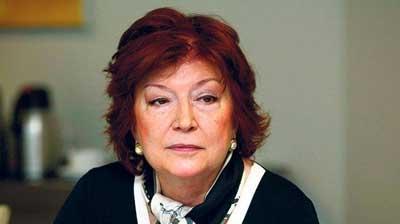 Prominent Turkish sociologist Nur Vergin, who had long had Alzheimer’s, has died in her home in Istanbul’s Beşiktaş district. She was 80.

Vergin was found dead at her house after her neighbors informed the police that they had not been able to reach her for two days.

Police teams arrived at Vergin’s house at around 5 p.m. on Jan. 18 and opened the door with the help of a locksmith. They found the lifeless body of Vergin as they entered her house.

Preliminary examinations revealed there was no suspicious case in Vergin’s death.

“We are saddened by the loss of Professor Nur Vergin, a retired academic from our university’s Faculty of Political Sciences. We extend our condolences to her family and relatives,” Istanbul University said in a statement.

“We have lost one of the important values of these lands, Professor Nur Vergin. She was a person of knowledge and virtue. We could not properly benefit from her knowledge. I hope that new generations will benefit from her works,” Health Minister Fahrettin Koca said on Twitter.

She returned to Turkey in 1973 and started working at the Istanbul University Faculty of Economics one year later. She became an associate professor in sociology in 1980. She worked at the Istanbul University Faculty of Political Sciences for a while. She became a professor with her work there. She later worked as a lecturer at the Marmara and Bilkent universities.