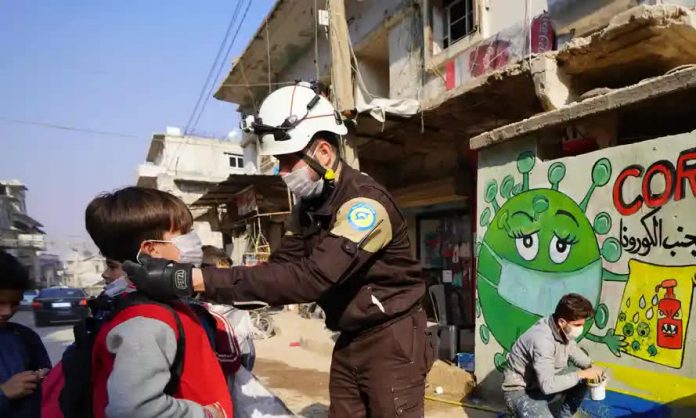 The White Helmets, created in 2014, grew out of local efforts at urban search and rescue in the aftermath of shelling and airstrikes. Photograph: Muhammad Haj Kadour/AFP/Getty Images

Syria’s White Helmets, who rescue victims from the rubble of airstrikes, have added making personal protective equipment to their efforts saving lives in areas of the country outside Bashar al-Assad’s control.

The civil defence service’s uniform-making unit has recently pivoted to manufacturing PPE with the help of a £1.17m award from a nonprofit organisation funded by the UK, US, Canadian and Dutch governments.

The local facility has already produced more than 2m masks, as well as protective gowns and face shields, and is handling the safe disposal of used PPE for north-west Syria’s vulnerable population of more than 3 million people.

“The Covid-19 pandemic was the most difficult challenge the White Helmets faced in 2020. We witnessed the spread of the virus in north-western Syria among humanitarian workers and medical personnel while the global pandemic made cross-borders logistics almost impossible,” said Munir Mustafa, the White Helmets’ deputy general manager for humanitarian affairs.

While doctors and humanitarian workers in Syria are still working at great personal risk to respond to and treat the disease, with the help of Creating Hope in Conflict: a Humanitarian Grand Challenge, the White Helmets have been able to scale up community efforts to keep people safe from coronavirus.

“Our volunteers and fellow humanitarians, healthcare providers, and other essential workers are safer now [thanks to the project] and can together continue caring for Syrian civilians and responding to the pandemic,” Mustafa added.

The White Helmets, created in 2014, grew out of local efforts at urban search and rescue and first aid in the aftermath of shelling and airstrikes. Since then the organisation has managed to save more than 120,000 lives despite sustained disinformation campaigns from Assad and his Russian allies to discredit their work.

After 10 years of war, the White Helmets, along with millions of civilians afraid to return to regime-held areas, the remains of the Syrian opposition, Turkish-backed rebel forces and dangerous Islamist groups, are now crammed into the north-west corner of the country.

Healthcare facilities have been decimated in bombings and millions of people who have fled violence elsewhere are living in tents and other inadequate shelter, leaving the area particularly exposed to the threat of coronavirus.

North-west Syria largely escaped the health crisis that engulfed the rest of the world until the winter months, when cases and deaths began to spike. Around 500 cases a day are now being recorded, although the true figure is likely to be much higher because of inadequate testing facilities.

While much of the international community prepares for the arrival of vaccines, fears are high in north-west Syria that another bitter winter will exacerbate the number of Covid-19 cases and compound the area’s existing humanitarian crises: severe flooding killed a six-year-old boy and displaced 41,000 people from camps on Monday.