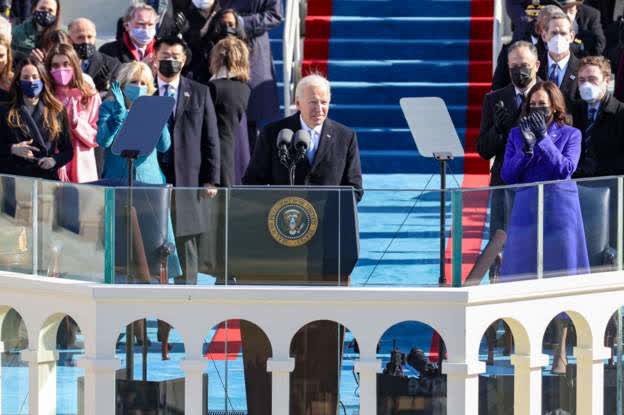 This is America’s day. This is democracy’s day, a day of history and hope, Joe Biden said in his first speech as US President.

“Through a crucible for the ages, America has been tested and it has risen to the challenge. Today we celebrate a triumph not of a candidate but of a cause, a cause of democracy,” he said.

“We learned again that democracy is precious. Democracy is fragile and at this moment, my friends, democracy has prevailed,” Biden said.

“Now, on this hallowed ground, where just a few days ago violence sought to shake the Capitol’s very foundation, we come together as one nation, under God, indivisible, to carry out the peaceful transfer of power as we have for more than two centuries,” he added.

He was speaking from the spot that two weeks ago was overrun by a pro-Trump mob as the Capitol was stormed.

“I thank my predecessors from both parties who are here today,” says the new president. Former Presidents Clinton, Bush and Obama are attending the ceremony.

Biden says he spoke to President Jimmy Carter – who is 96 – by phone, and salutes him for his lifetime of service.

His immediate predecessor, Donald Trump, chose not to attend the inauguration.

Speaking of the challenges that his administration will face, including the pandemic and the rise of “white supremacy”, Biden says he will “confront and we will defeat” each obstacle.

He repeats his campaign vow to “restore the soul of the future of America,” but says doing so “requires so much more than words”.

“It requires the most elusive of all things in a democracy: Unity.”

“The forces that divide us are deep and they are real – but they are not new,” says Joe Biden

“The battle is perennial, and victory is never assured.

“Our better angels have always prevailed,” says the new president, citing moments from US history such as the Civil War.

“History, faith and reason show the way of unity,” he says.

We must meet this moment as the United States of America, he stresses.