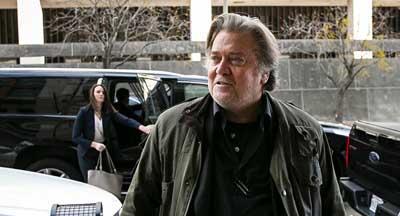 Earlier media reports suggested that following a series of clemencies Trump has granted recently, he could also pardon Bannon, who played a key role in Trump’s successful election bid in 2016 and became a chief adviser to the president. He was fired after a tumultuous eight months in the role.

Outgoing US President Donald Trump has granted a pardon to former adviser Steve Bannon in one of his final acts as US leader, the White House said in a press release on Wednesday.

“President Trump granted a full pardon to Stephen Bannon. Prosecutors pursued Mr Bannon with charges related to fraud stemming from his involvement in a political project. Mr Bannon has been an important leader in the conservative movement and is known for his political acumen”, the press release read.

According to the White House, Bannon’s pardon is part of Trump’s decision to grant pardons to 73 individuals, including former Google engineer Anthony Levandowski, who was sentenced to 18 months in prison in August 2020 for stealing self-driving car files from the company.

The White House described Levandowski as “an American entrepreneur who led Google’s efforts to create self-driving technology”, adding that he had “paid a significant price for his actions and plans to devote his talents to advance the public good”.

Trump also granted clemency to lawyer Paul Erickson, who was sentenced to a prison term for wire fraud and money laundering.

The 59-year-old used to date Russian national Maria Butina, who served a 1.5-year term in a US prison for acting as a foreign agent.

The press release noted that Erickson’s conviction “was based off the Russian collusion hoax” and that “after finding no grounds to charge him with any crimes with respect to connections with Russia, he was charged with a minor financial crime”.

Trump’s move comes a few days after the media claimed POTUS was considering including Bannon in two waves of pardons before President-elect Joe Biden is sworn in on 20 January.

The US president is not expected to pardon himself, members of his family, or lawyer Rudy Giuliani, who was at the forefront of his campaign’s bid to contest the outcome of the 2020 presidential election.

In August 2020, Bannon was arrested and found guilty of conspiracy to commit wire fraud and money laundering after raising donations from a non-profit organisation to fund building a wall across the US border with Mexico.

The ex-White House chief strategist pleaded not guilty and was then released on bail, expecting to face trial in May 2021.

Aside from Bannon, the US Justice Department lodged wire fraud charges against three other individuals, including US Air Force veteran Brian Kolfage, Sarasota-based Andrew Badolato, and Acting Administrator of the Drug Enforcement Administration Timothy Shea. All of them face up to 20 years in prison should they be found guilty.

The Justice Department insisted that the “We Build the Wall” crowdfunding campaign, which seeks to raise money to build a wall on the US border with Mexico akin to the one being pursued by President Donald Trump, was a major scam that defrauded hundreds of thousands of people. According to the department, the four men used the $25 million raised for the cause in a manner that was “inconsistent with public representations”.

US President Donald Trump reacted to the news of his former aide’s arrest by stating that he had long stopped working with Bannon and distanced himself from the “We Build The Wall” project.

“I feel very badly. I haven’t been dealing with him for a very long period of time. Don’t know anything about the project at all. It’s a very sad thing by Mr Bannon. It was something I very much thought was inappropriate to be doing”, POTUS said.

White House spokeswoman Kayleigh McEnany said at the time that President Trump did not support the private wall project, believing that such things should be built by the government and not private companies or individuals. During his time at the White House and on Trump’s campaign, Bannon was reportedly one of the key proponents for building a wall on the border with Mexico, which Trump made one of the primary goals of his presidency.

Bannon played a key role in Trump’s successful election bid in 2016 and became a chief adviser to the president.

He was fired in August 2017, after a tumultuous eight months in the job, which saw Bannon locking horns with Trump’s son-in-law and senior adviser, Jared Kushner, as well as other senior POTUS advisers over what the media described as power struggles.

in 2018, Trump insisted that “Steve Bannon has nothing to do with me or my presidency”, adding that “when he was fired, he not only lost his job, he lost his mind”.

The statement came in response to Bannon being quoted in a new book by author Michael Wolff as saying that an alleged meeting between Trump’s son and a group of Russians was “treasonous”.

At the time, Trump’s lawyers reportedly argued that Bannon had broken his employment agreement by speaking to Wolff about POTUS and his family. The lawyers accused Bannon of “disclosing confidential information” and “making disparaging statements and in some cases outright defamatory statements to Mr Wolff about Mr Trump, [and] his family members”.

On 19 August 2017, then-White House press secretary Sarah Huckabee Sanders confirmed Bannon’s departure, adding that the decision for him to step down was mutual.

“White House Chief of Staff John Kelly and Steve Bannon have mutually agreed today would be Steve’s last day. We are grateful for his service and wish him the best”, Sanders said in a statement. It was echoed by Trump’s tweet at the time, in which POTUS wrote that he wants “to thank Steve Bannon for his service”.

Trump has already issued a wave of pardons to a slew of longtime associates, including former campaign chairman Paul Manafort, Charles Kushner, the father of his son-in-law, Jared, his ex-campaign adviser Roger Stone, and former National Security Adviser Michael Flynn.