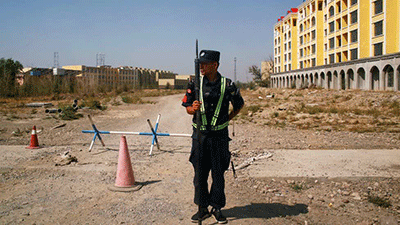 image captionChina says its facilities for Uighurs are for vocational education

China has committed genocide in its repression of the Uighurs and other mainly Muslim peoples, US Secretary of State Mike Pompeo said on Tuesday.

President-elect Joe Biden’s choice for secretary of state, Antony Blinken, has said he agrees with the finding.

Rights groups believe that China has detained up to a million Uighurs over the past few years in what the state defines as “re-education camps”.

BBC investigations suggest that Uighurs are being used as forced labour.

Tensions with China have been a defining feature of Mr Trump’s term, from trade policies to the coronavirus pandemic.

“I believe this genocide is ongoing, and that we are witnessing the systematic attempt to destroy Uighurs by the Chinese party-state,” Mr Pompeo said in a statement. It is his last day in office as part of Donald Trump’s administration.

While the statement puts pressure on China, it does not automatically introduce any fresh penalties.

Mr Blinken was asked at his confirmation hearing on Tuesday if he agreed with Mr Pompeo’s announcement, to which he answered: “That would be my judgment as well.”

Mr Biden’s team made a similar allegation last August, saying the Uighurs had suffered “unspeakable oppression… at the hands of China’s authoritarian government”.

Pressure on China – and Biden

On its very last day, the Trump administration has delivered its final “gift” to China, in the form of a parting shot.

This is by far the strongest condemnation by any country regarding China’s actions in its north-western region of Xinjiang. The EU, the UK and Australia, which have repeatedly criticised the human rights condition in Xinjiang, may consider following suit.

It could lead to unprecedented international pressure facing China, but would that change Beijing’s behaviour? Today’s Beijing is emboldened by the consolidation of political power, positive economic growth amid a pandemic, and to some degree, political chaos in Washington. A Chinese state media representative has quickly hit back that the US has “committed genocide” of Americans with its botched handling of the pandemic.

For many countries including the US, economic ties with China have become too substantial to be entirely cut off. Between human rights and economic interests, the balancing act towards China is getting increasingly difficult.

Although the Biden team had referred to the suppression against Uighurs as “genocide”, Xinjiang may not have been one of its priority issues. But the new administration will now be compelled to announce a concrete policy stand on Xinjiang. It’s clear that the tit-for-tat between Beijing and Washington will not finish with Mr Trump’s term in the White House.

What is the situation in Xinjiang?

China says it is fighting “three evil forces” of separatism, terrorism, and extremism in the far western region of Xinjiang, where most of the 11 million Uighurs live. It says its “training measures” in Xinjiang are necessary to combat these.

In recent years, Xinjiang has seen a large influx of settlers from China’s ethnic Han majority. Anti-Han and separatist sentiment has become more prevalent in the territory since the 1990s, flaring into violence on occasion.

Campaigners say China is trying to eradicate the Uighur culture, by forcing Muslims to eat pork and drink alcohol.

Last week, Mr Trump’s administration banned the import of cotton and tomato products from the Xinjiang region of China, where the majority of Uighurs live.

Xinjiang accounts for nearly a fifth of world cotton production, the US estimates.

China has been widely accused of using detention camps in Xinjiang for forced labour, particularly in the cotton industry.

An investigation by the BBC in 2019 suggested that children in Xinjiang were being systematically separated from their families in an effort to isolate them from their Muslim communities.