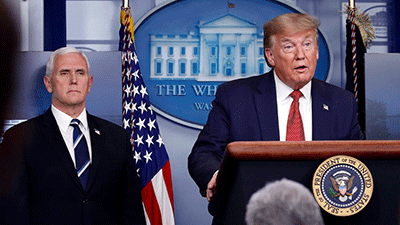 Vice President Mike Pence is not expected to attend Wednesday morning’s farewell ceremony for President Trump at Joint Base Andrews, a source familiar with the vice president’s schedule confirms to Fox News.

The news comes as the vice president officially announced on Tuesday afternoon that he and outgoing second lady Karen Pence will attend the inauguration of President-elect Joe Biden and Vice President-elect Kamala Harris, which is scheduled for Noon E.T. on Wednesday, at the west front of the U.S. Capitol.

Pence aides tell Fox News that it would be logistically challenging for the vice president to show up at both the presidential inauguration as well as the Trump farewell ceremony, which is being held four hours earlier.

Taking to Twitter on Tuesday afternoon – on the eve of his final hours as vice president – Pence wrote “Thank you for the privilege of serving as your Vice President these past four years, it has been the greatest honor of my life. On behalf of our Wonderful Second Lady, Karen Pence, and our entire Family, Thank You and God Bless America.”

Trump will depart Joint Base Andrews at around 8am ET Wednesday for his home in Florida. He will become the first president in more than a century and a half to not attend his successor’s inauguration.

Besides Pence, the top two Republicans in Congress will also not be attending the president’s send-off. Senate GOP leader Mitch McConnell and House Republican leader Kevin McCarthy are not expected to attend, as they’ve been invited to join Biden for a pre-inauguration church service in the nation’s capital.

Trump’s military send-off is expected to be attended by the president’s family, close aides and some supporters.