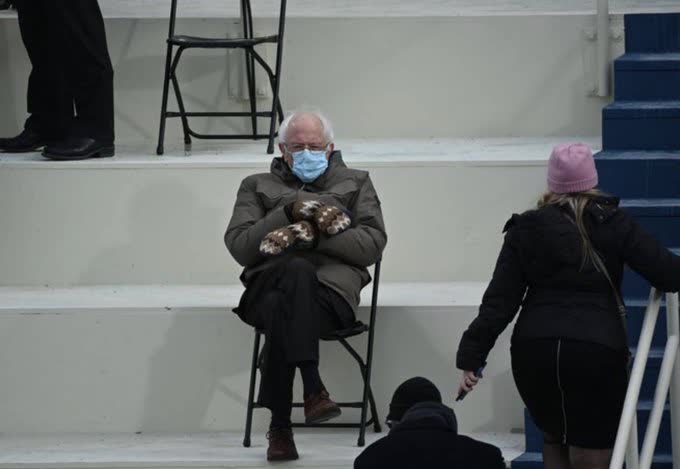 Joe Biden is officially president, Kamala Harris is the country’s first Madam Vice-President and Lady Gaga belted out the national anthem – all of that we expected.

Here’s a look at inauguration day’s more candid moments you might have missed.

Pictures of Vermont Senator Bernie Sanders bundled up in Washington’s near-freezing weather quickly made the rounds on social media.

Many pointed out, and initially made fun of, his patterned brown wool mittens. It turns out there’s a sweet story behind his distinctive (and sustainable) winter wear. The mittens were reportedly made by a schoolteacher from his home state, using repurposed wool sweaters and recycled plastic bottles.

As the former challenger of Mr Biden during the Democratic primaries, many were quick to joke that Mr Sanders must be in a foul mood sitting at his rival’s inauguration. It didn’t take long for the senator to become a viral internet meme.

And according to his wife, Jane O’Meara Sanders, the senator’s jacket also has a Vermont connection. The snowboard company Burton manufactured a limited edition coat with Mr Sanders’ face on the back. Mr Sanders liked it so much, he got one (without his face on it) for Christmas.

The moment was celebrated online as a historic passing of the torch between the two political trailblazers, the only black Americans in history elected to serve in the White House.

BYOB (Bring your own blanket)

Mr Sanders wasn’t the only one dressed for the cold.

Janet Yellen, President Biden’s choice for treasury secretary, was pictured at the Capitol Hill event wearing a black parka, a face mask and black gloves, while wrapped snuggly in a blanket.

The wardrobe choice won the expert economist admiration as a practical type of fashion icon in the Covid era.

Ms Yellen’s appointment is expected to be approved, meaning the US will soon have its first female treasury secretary.

Mr Goodman has been hailed as a hero after his actions during the storming of Capitol Hill earlier this month. Footage from inside the deadly insurrection shows the officer singlehandedly steering a mob away from the Senate chamber, while the lawmakers hid inside.

His actions reportedly gave the lawmakers a chance to escape the chamber and move to a secure location before the rioters could enter.

Mr Goodman accompanied Ms Harris in his new role as deputy Senate sergeant-at-arms. In addition to the job promotion, a bipartisan trio of lawmakers have introduced a bill to award Mr Goodman with the Congressional Gold Medal for his bravery.

We knew to expect poet Amanda Gorman in the inauguration line-up, but we did not know how much she would resonate with people around the world.

“When day comes, we ask ourselves where can we find light in this never-ending shade?” began Ms Gorman, the country’s youngest ever inaugural poet.

At today’s celebration, the 22-year-old performed her poem titled “The Hill We Climb” – penned after the Capitol riots. The writer and performer became the country’s first national youth poet laureate in 2017.

Today, the self-described “skinny black girl, descended from slaves… [who] can dream of becoming president” has found “herself reciting for one”. But her ambitions don’t end there – according to former Secretary of State Hillary Clinton, Ms Gorman has promised a future presidential run of her own.

As Mr Biden took the oath of office in Washington, the Trumps landed in West Palm Beach, Florida. Social media users were quick to point out that Mrs Trump appeared to have quickly updated her wardrobe to suit her new, post-First Lady life.

After donning a sombre black coat and large dark sunglasses as she left the White House, Mrs Trump made a mid-flight outfit change to a bright, multi-coloured pattern dress.

The stark difference between the two ensembles led some to speculate that Mrs Trump is looking forward to shedding the duties – and the clothing – of first lady. Others noted her bright smile after touching down in Florida – an apparent contrast to how she looked at her husband’s inauguration four years ago.