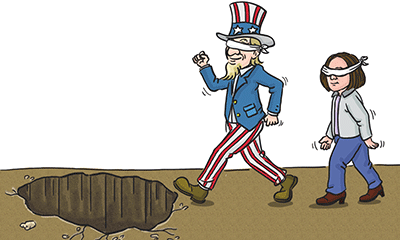 Democratic Progressive Party (DPP) authorities in Taiwan are anxious about transfer of power in the US. They know they will remain a pawn for Washington, but they are not sure how the new Biden administration will play this pawn.

President Donald Trump set a bad example four years ago when he made a phone call as president-elect with Tsai Ing-wen. That Joe Biden didn’t call after his victory is a signal Tsai and her colleagues must be interpetting with some anxiety.

The Trump administration’s rough Taiwan policy over the past four years has made the Tsai authorities hyperactive. Their cooperation is proactive and outsized. At one point, they were convinced that Trump would be re-elected, and they “bet” on it. In addition to ingratiating themselves to the Trump team during the election, Tsai authorities acted in response to Trump’s demands and were suspected of “being involved in the US election.”

Those efforts included mobilizing the island’s separatist media to amplify the Republican Party’s attacks on Biden’s son, opening its market to import pork and beef containing ractopamine to help Trump woo farmers’ votes, and retweeting Melania Trump’s campaign message on the official account of the Taipei Economic and Cultural Representative Office in the US. A DPP lawmaker sported a face mask with Trump’s name on it, reflecting Tsai authorities’ confidence that Trump would be re-elected.

Trump’s loss in November left the DPP authorities embarrassed and panic. But when Mike Pompeo, a key member of the Trump team, and others planned to completely destroy the one-China principle in the final stage and dig a pit for Biden’s China policy, the DPP authorities once again made the final crazy choice to cooperate with the Trump-Pompeo team.

One of Pompeo’s main diplomatic incursions has been aimed at the island of Taiwan. He announced in January that he was lifting all restrictions on US officials’ contacts with Taiwan, following a planned visit of the US Ambassador to the United Nations Kelly Craft to the island. The US ambassador to the Netherlands later met with Taiwan representatives there. Tsai authoritative are well aware that Pompeo is stepping on the red line. His abrupt final moves toward the island have created a huge risk for the Biden administration and are forcing the latter, while Tsai authorities choose to participate in this intimidation by handing the shovel to Pompeo and let him set the trap for Biden.

The room for the Biden administration to maneuver has been greatly squeezed by Tsai authorities’ final collusion with Pompeo and his likes, which brought the Taiwan question to the brink of a showdown.

The truth is that the Tsai authorities’ cross-Straits policy has come to a dead end. They saw that the Trump administration is keen to use the Taiwan question to contain China, so they want to turn the US government into their tool and kidnap the US in their adventurism. So they fit in easily with Pompeo, who worked recklessly while the rest of Trump’s team quietly awaited the transfer of power.

The purpose of Tsai authorities is to create a “new reality” across the Taiwan Straits together with Pompeo, to force Biden to follow Trump’s policy, and make the Biden administration deal with the fallout from Pompeo’s final madness.

The situation in the Taiwan Straits today is utterly different from the previous Democrat-led US administration. While Trump touted his record of no new wars during his tenure, he has dismantled some key assurances for peaceful China-US ties and pushed game in the Straits with a perilous gamble. His team now leaves the risks it created to the Biden administration. Tsai authorities will act as the “guard” assigned by Trump and Pompeo to push the Biden administration to continue this dangerous path.

But Taiwan’s DPP authorities have misjudged the situation. It’s not the US that will decide their destiny, it’s the Chinese mainland. What they should care about most is not signals from the new US government, but how PLA fighter jets are increasingly approaching the island of Taiwan, and will finally fly over it to declare sovereignty of the People’s Republic of China over the island of Taiwan.