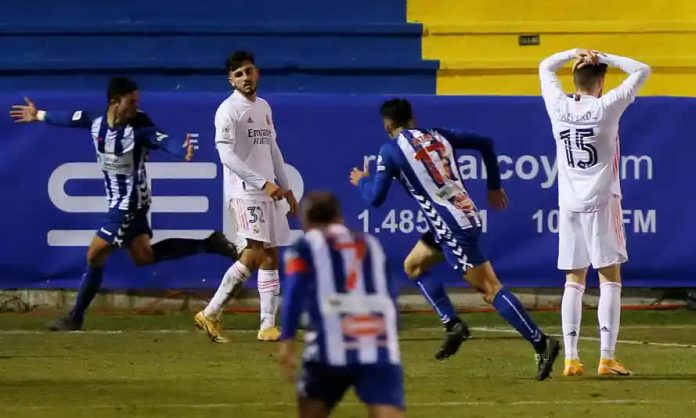 The Guardian – Guardian sport and agencies

Real Madrid have sensationally been knocked out of the Copa del Rey by Alcoyano, a third-tier Spanish side, who scored a dramatic winner in extra time after being reduced to 10 men.

Militão headed in a Marcelo cross at the back post to give Madrid a first-half lead but the minnows fought back in the second period, with José Solbes equalising to send the match into extra time.

Zidane brought on Eden Hazard and Marcos Asensio and Madrid looked likely to win the tie when Alcoyano’s Ramón López was given a red card in the second half of extra time. But Juanan Casanova nipped in at the near post to volley a 115th-minute winner and send Zidane’s team out of the competition – Madrid’s worst cup defeat since being knocked out by Alcorcón in 2009-10.

“It’s not an embarrassment, it’s something that can always happen in football,” Zidane said after the match. “Something like this can happen in a footballer’s career but I take responsibility for it and we’ll keep on working. We’re not going to go crazy over this.”

When asked whether he feared for his position as manager, Zidane replied: “When you lose people always talk about that but I take responsibility and whatever will be will be. I’m very relaxed, our players want to win every game, they always try to but sometimes something else happens.”

Cristiano Ronaldo arguably became football’s all-time leading goalscorer by firing Juventus to Italian Super Cup glory against Napoli. The match is played to contest the winner between the champions of last season’s Serie A and Coppa Italia.

Lorenzo Insigne had a chance to ruin Ronaldo’s milestone moment but missed an 80th-minute penalty before Álvaro Morata wrapped up the win for Andrea Pirlo’s side deep into stoppage time.

Ronaldo registered the 760th strike of a remarkable club and international career in the 64th minute to help reigning Serie A champions Juve claim the trophy with a 2-0 win. The 35-year-old former Manchester United and Real Madrid forward moved one goal ahead of Czech player Josef Bican, who officially managed 759 strikes between 1931 and 1955.

There has been some contention over scoring records in recent weeks. Lionel Messi became the all-time top scorer for a single football club after scoring his 644th Barcelona goal in December, surpassing Pelé’s previous record tally for Santos, but the Brazilian club hit back by claiming Pelé’s total club tally actually stands at 1,091, adjusted to include goals scored in one-off games during the tours of the 1960s. These exhibition matches are not widely accepted to be part of official records, although the fixtures were often against the best teams of the age.

Bundesliga top scorer Robert Lewandowski struck a first half penalty to help Bayern Munich earn a nervous 1-0 victory at Augsburg on Wednesday and stay four points clear at the top of the table at the season’s halfway mark.

Lewandowski put the visitors in front with a 13th minute penalty, his 22nd league goal, the most for any player halfway through a Bundesliga season. He has featured in 16 of Bayern’s 17 league games this season.

The striker had several more chances to add to his record-breaking goal haul and also hit the post in a dominant first half. Instead of scoring again, however, to make sure of the three points, Bayern were far too passive and conceded a 75th-minute penalty. They had a lucky escape when Alfred Finnbogason sent his spot kick onto the post.

The Bavarians are on 39 points, four ahead of RB Leipzig, winners 1-0 over Union Berlin, and seven ahead of third-placed Bayer Leverkusen. Leipzig’s Emil Forsberg drilled in a second-half winner after a neat one-two with Dani Olmo to break the deadlock in the 70th minute.

At the other end of the table, Schalke remain rock bottom after conceding a dramatic stoppage-time winner in the 2-1 loss to fellow strugglers Cologne.

Schalke’s Matthew Hoppe cancelled out Rafael Czichos’s opener to level for the hosts but Jan Thielmann struck at the death to inflict defeat. Cologne, however, remain in the relegation zone after Fabian Klos, an own goal from Marc-Oliver Kempf and Ritsu Doan gave Arminia Bielefeld a thumping 3-0 win over Stuttgart.

In La Liga, Villarreal missed the chance to go third after Paco Alcácer missed a stoppage-time penalty in the 2-2 draw with Granada.

Alcácer’s failure from 12 yards, following the dismissal of Yan Eteki, prevented the hosts moving above his former club Barcelona. Veteran striker Roberto Soldado and Chelsea loanee Kenedy earned Granada a point by scoring either side of Rubén Peña’s goal and Moi Gómez’s spot-kick.

Sergio Canales’s double cancelled out Santi Mina’s goal to give Real Betis a 2-1 success over Celta Vigo, while Huesca remain bottom after a second-half strike from Mauro Arambarri condemned them to a 1-0 defeat at Getafe.

Udinese took the lead after 23 seconds with Kevin Lasagna finding Roberto Pereyra who stabbed the ball home to score his side’s fastest Serie A goal since November 2014. The hosts almost held out until halftime, but Muriel’s strike – his 11th Serie A goal of the season on his sixth start – levelled things up in the 44th minute.

In France, Lens moved to within a point of sixth-placed Marseille courtesy of Simon Banza’s second-half goal securing a 1-0 win at the Stade Velodrome. Saturday’s game at Nîmes with Lorient has been postponed because of a Covid-19 outbreak in the visiting side.