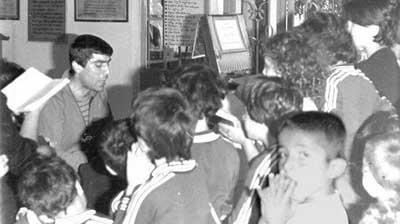 An Armenian orphanage in Istanbul’s Tuzla district where the slain journalist Hrant Dink grew up will be turned into a youth camp thanks to a decision taken by the city’s municipal council.

The municipal council has unanimously passed a proposal to build a youth camp on the grounds of the Gedikpaşa Armenian orphanage, also known as Kamp Armen, allowing social and cultural facilities for the site with the zoning change it made.

The orphanage was built in 1962 by the Gedikpaşa Armenian Protestant Church, as a former building on the site could not host the increasing number of Armenian students arriving from various parts of Anatolia.

During the summer of 1962 and afterwards, Armenian orphans, between the ages of 8 and 12, worked in the construction of the buildings at the camp.

Known as the orphanage where Dink, and his wife, Rakel Dink, met, studied and grew up, the orphanage was expropriated by authorities in 1987 on the basis of a 1936 bill preventing minority foundations from acquiring property.

“We have turned that flat barren land into a place that is getting greener and more colorful. We went to live a camp life, we built camps and returned to our boarding school that summer,” Dink had written in a column in 1996, describing the days when they built the camp in the 1960s.

As the legal process and the lawsuits took years, in 2007, Dink was gunned down in broad daylight in front of his office in Istanbul before seeing the verdict of the court regarding the orphanage.

Although the Turkish government signed a decree in 2011 to return property taken away from minority foundations in the past, Kamp Armen was omitted, alongside hundreds of other properties across the country.

The building changed hands several times before being bought by Fatih Ulusoy, who had decided to demolish it to make room for new buildings in 2015.

The controversial plan was later shelved as Ulusoy said he would donate it to the Gedikpaşa Armenian Protestant Church and School Foundation after a group of activists protested the demolition in front of construction vehicles, drawing public attention to the orphanage.

Earlier this week, the city’s municipal council accepted a construction plan regarding the orphanage, which will be rebuilt taking the original building into account, and the camp area was taken under a private social and cultural facility area category in line with the church foundation’s will.

With this change, facilities such as a public education center, social aid units, dormitories, nursing homes, and homes for the vulnerable will be built in the area.

“With respect to his memory… There are no barriers left to start the Kamp Armen Youth Center. I remember him with God’s mercy and grace,” Istanbul’s Mayor Ekrem İmamoğlu announced the change in a tweet on Jan. 19, while commemorating Dink on the anniversary of his assassination.