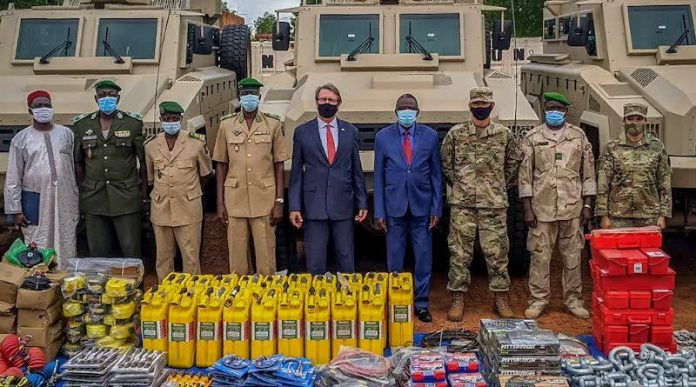 US donates US$8 million in military equipment to Niger to aid the West African nation and its G5 Sahel Joint Force partners in the fight against terrorism in the region. Photo Credit: US Embassy Niger

Hope of greater US multilateralism under the new president should not distract from proactive, locally driven strategies.

President Joe Biden’s promise to restore the United States’ global relations and alliances renews hope of America’s wider embrace of multilateralism. It is anticipated that deeper US engagement will also entail greater security cooperation with Africa, of which counter-terrorism is key.

However at this stage there is no clarity about the character or direction of Biden’s Africa policy on terrorism – something that should keep African countries focused on their own proactive approaches. Such approaches should seek to first engage local capacities and actors, as opposed to raising expectations about foreign aid, troops and training from the US.

America has a longstanding military footprint in Africa. Since 2001 the continent has been a focal point for US military presence, especially in the ‘global war on terror’. In fact, since the 9/11 terrorist attacks, the US military has built a sprawling network of outposts in more than a dozen African countries.

Ironically, during the same period, the activities of terror groups on the continent have increased. This raises doubts about the relevance of a continued US military presence for counter-terrorism in Africa. Perhaps this will be a point of reflection for Biden’s administration especially as 2021 marks two decades since the 9/11 attacks.

Recalling 9/11 will also be a reason for the new government to reflect on the US’s progress and setbacks in countering terrorism on its soil, as well as US engagement with the global community on these matters. Under Biden, the US may indeed lend support to African efforts and if so, it needs to be more thoughtful than that witnessed during the Trump presidency.

Over the past four years, Trump’s administration was largely characterised by an unwillingness to meaningfully engage African countries. The use of force, through the ramping up of airstrikes in countries like Somalia, overshadowed US efforts to adopt non-military counter-terrorism approaches.

By January 2019, the Bureau of Investigative Journalism noted that over 500 people in Somalia had been killed by US airstrikes since the start of 2017 when Trump took office. In the first seven months of 2020, the US conducted more airstrikes in Somalia than were carried out during the Bush and Obama administrations combined.

Despite this, groups like al-Shabaab remain active and the ‘whack-a-mole’ counter-terrorism approach in the Horn of Africa, as elsewhere, remains ineffective. Even the targeted killing of terror group leaders such as Abu Bakr al-Baghdadi in 2019 didn’t lead to a decline in the presence or activities of ISIS affiliates particularly in Africa.

The actions of Biden’s predecessor revealed an aversion towards global cooperation with countries on the multi-dimensional nature of terrorism. The Trump administration raised doubts about the US’ understanding of how to tackle terrorism as a transnational issue. These are setbacks that the new government needs to acknowledge as it commemorates the 9/11 attacks, which itself demonstrated the complex global nature of the problem.

While rejecting the condescending character of Trump’s ‘America First’ mantra, to an extent Biden will be constrained by homeland priorities. He takes leadership at a time when sharp political and racial polarisation weigh heavily on the US amid the rise of far-right extremism.

The country is also one of the worst hit by the COVID-19 pandemic. These domestic demands may inevitably inspire foreign engagements that are guided by internal dynamics in the US and which may fall short of expectations on the global stage. Nevertheless, Biden’s administration cannot escape the demands that require multitasking foreign policies in relation to countries such as Afghanistan, China, Iran and Russia among others.

Africa should not hold its breath and expect a seismic shift from the Trump era that delivers significant investment of limited US resources in counter-terrorism on the continent. While Biden’s approach to violent extremism takes shape in the coming months, there is currently a massive drawdown of US soldiers from Somalia.

This is similar to trends in the Sahel. Since 2020, US defence priorities in the region have shifted from the deployment of troops that seek to degrade terror groups to merely trying to contain them.

African states may look forward to goodwill from the Biden administration, but the counter-terrorism discourse must be driven within African borders by leaders on the continent. There is nothing wrong with global counter-terrorism cooperation that is mutually beneficial, along the lines of the joint terrorism task force established in 2020 by Kenya and the US.

The level of commitment recently expressed by African countries in ratifying the African Continental Free Trade Area agreement is the kind of focus needed to stop terrorism. Many countries already have national strategies for countering terrorism or violent extremism, but the political will to make them work is lacking.

A sense of urgency and structured engagement on a continental level is equally absent when it comes to implementing counter-terrorism policies. These intangibles cannot be imported from the US – or anywhere outside the continent – no matter the amount of goodwill evoked by Biden’s emergence into office.

Source: This article was published by ISS

The Institute for Security Studies (ISS) partners to build knowledge and skills that secure Africa’s future. Our goal is to enhance human security as a means to achieve sustainable peace and prosperity. The ISS is an African non-profit organisation with offices in South Africa, Kenya, Ethiopia and Senegal.