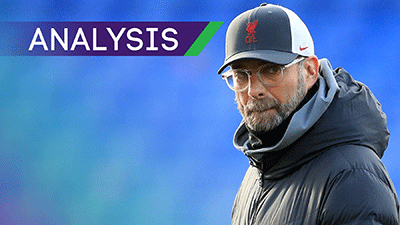 Liam Kelly looks at the numbers behind Liverpool’s recent decline

Inefficiency in front of goal has cost Liverpool valuable ground in recent matches, scoring just once from chances equating to 6.3 expected goals (xG) in their last four Premier League games — dropping to fourth place in the table as a result.

Overall attacking output has declined recently, too, averaging 1.56 xGF per game across their last nine league games after a scorching start to the season (2.53 xGF per game prior).

At first glance, Salah appears to be at his brilliant best this season, topping the Premier League scoring charts with 13 goals. However, five of those goals have come from the penalty spot, and his underlying metrics are a cause for concern.

Salah is averaging 0.36 non-penalty xG per 95 minutes (average match duration) in 2020/21, an evident drop-off on his numbers in previous campaigns at Liverpool.

A fair portion of that steep decline can simply be attributed to the location of Salah’s efforts on goal. The Egyptian has yet to record a single shot inside the six-yard box in the Premier League this season. For perspective, Salah recorded eight shots in the six-yard box in 2017/18, 14 in 2018/19 and nine in the 2019/20 title winning season. As a result, his non-penalty xG per shot figure has dropped from an average of 0.14 over the course of his first three Liverpool campaigns to 0.11 this season.

Although Sadio Mane and Roberto Firmino’s creative numbers remain positive, they too are struggling in front of goal. Liverpool are currently missing the spark that their typically energetic front three often provide.

Liverpool’s solidity while dealing with injuries

Virgil van Dijk’s potentially season-ending ACL rupture in the Merseyside Derby marked the beginning of a spate of injuries in Liverpool’s defensive unit. Alisson, Joe Gomez, Joël Matip and Trent Alexander-Arnold have all missed time in subsequent games, leading to a revolving door-feel to the Reds defensive line-up.

In the 13 Premier League matches since Van Dijk’s injury, Liverpool have fielded 10 differing sets of personnel in their back four, with Andrew Robertson the only constant. Jürgen Klopp has selected seven separate centre-back partnerships in that period, handing Premier League starts to academy products Nathaniel Phillips and Rhys Williams, while relying on Fabinho and Jordan Henderson to perform out of position. Liverpool used only three centre-back combinations in the entirety of their wildly successful 2019/20 campaign. Virgil van Dijk featured in all three.

Somewhat surprisingly, Liverpool’s ever-changing, makeshift backline has risen to the occasion. The Reds have conceded chances equating to an average of 1.09 xGA per game in Van Dijk’s absence.

Although those numbers are similar to their title winning 2019/20 season, where they allowed an average of 1.13 xGA per game, Van Dijk’s sheer presence is undoubtedly missed in both boxes, notably as an aerial force.

Headed chances conceded by Liverpool in 2019/20 amounted to 0.15 xG per game, and 0.07 xG2 per game (xG2 accounts for shot power, placement and other variables for shots on target). However, both location-based and post-shot xG2 numbers for headers have risen to 0.22 xG per game this season.

At the opposite end, only 13% of Liverpool’s total xG has come from corner and set-piece situations this term, one of the lowest percentages in the Premier League.

Unstoppable force and a movable object

Liverpool are short-priced favourites to extend their 68-game unbeaten Premier League record against Burnley on Thursday, but a win is needed to lift the Reds out of their current slump.

The underlying metrics behind that run are astounding. Liverpool have averaged 2.28 xGF and 0.83 xGA per game in the streak that stretches back to May 2017, maintaining a chasm between their xGF and xGA trendlines.

Klopp’s men have lost the xG battle in just seven of those matches. All were against tough opposition (Man City x 3, Chelsea x 2, Spurs x 1 and Leicester x 1), and often by a narrow margin.

Understandably, Liverpool have been less impressive on their travels during that long period, but their performances away from Anfield in 2020/21 have been a little unsettling.

Headlined by a heavy 7-2 defeat at Aston Villa (xG: AVL 3.36 – 1.75 LIV), Liverpool have won just two of their nine Premier League games on the road, posting a middling +4.0 expected goal difference (xGD) in the process.

A trip to Old Trafford to face Manchester United in the FA Cup Fourth Round awaits on Sunday in what has — unexpectedly — become a massive week in Liverpool’s faltering season.