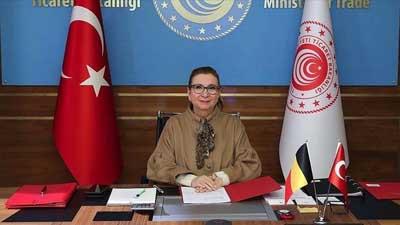 Turkey and Belgium are aiming to increase their bilateral trade volume from $7.3 billion to up to $10 billion annually, the Turkish trade minister said on Jan. 20.

The two countries held the second term meeting of the Joint Economic Trade Committee (JETCO), which was established in 2013.

Pointing to the current bilateral trade volume of $7.3 billion, Ruhsar Pekcan said: “The figure was $6.6 billion in 2019. Despite the pandemic, the increase is an important indicator of the existing commercial potential between the two countries.”

Underlining that Turkey has been in close economic integration with the EU countries, the minister said she believes that bilateral relations will continue to get stronger in the post-pandemic period.

“In this context, we will continue to work together and make joint efforts with our important trade partners, such as Belgium, to increase mutual trade and investments,” the trade minister added.

In such a troubled period, Turkey – with its 82 million population, young and qualified workforce, dynamic production, export, and quality infrastructure – is one of the key players which may contribute to the EU economy’s needs, she stressed.