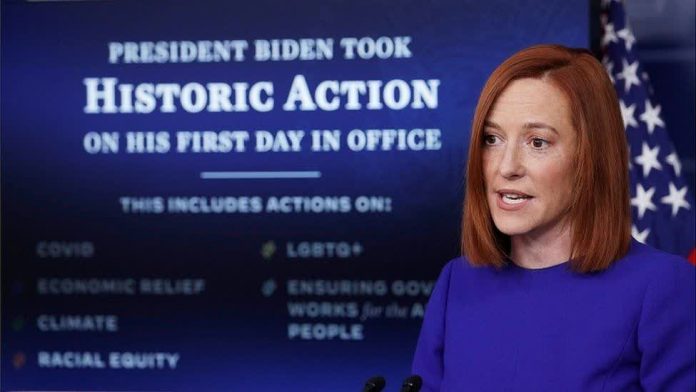 Psaki was previously an Obama administration official and a CNN contributor

Jen Psaki made her debut in the White House Briefing Room on Wednesday as President Biden’s press secretary.

In 2013, she moved to the State Department where she served as a spokesperson for then-Secretary of State John Kerry.

During her tenure at the State Department, Psaki was known for her combative exchanges with reporters. One of those exchanges became at the center of a controversy after it was discovered in 2016 that an eight-minute exchange from 2013 with Fox News reporter James Rosen was edited out of the State Department archives, where she appears to admit that the department previously misled reporters and the American people about the origins of the Iran Nuclear Deal.

In 2015, Psaki returned to the White House, this time as communication’s director, which she served until the end of President Obama’s second term.

Following serving the Obama administration, she became CNN contributor and was featured on-air during the 2020 presidential election.

After it was announced that Psaki would become Biden’s White House press secretary, a resurfaced clip from October 2019 showed her appearing to question the then-Democratic candidate’s questionable gaffes on the campaign trail, specifically one he made at a CNN town hall when he referred to “gay bathhouses” on the subject of LGBTQ issues.

“There have been a number of moments were even those of us who have affection for Vice President Biden think ‘what on Earth is happening right now?'” Psaki recalled from the Obama administration during a CNN panel.  “And part of his appeal is that he says things that your uncle says and people feel comfortable with him and its a return to normalcy. So yes, that was a weird comment. I’m not sure if that’s going to impact him in the long run.”

Psaki also criticized Biden’s “rusty” performance and appeared “out of touch” with the electorate following the first Democratic primary debate in June 2019.

At her first briefing as White House press secretary, Psaki told reporters that President Biden asked her that she bring “truth and transparency back to the briefing room” and to “ensure we are communicating the policies across the Biden-Harris administration” to the media and to the American people.

“There will be times when we see things differently in this room, among all of us,” Psaki said. “That’s okay— that’s part of our democracy.”

She added: “Rebuilding trust is central to our focus in the White House and in the press office.”